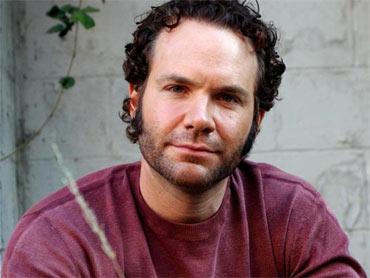 Singer-songwriter John Ondrasik, who leads the Grammy-nominated group Five For Fighting, is giving fans another "Slice" of musical talent.

The platinum-selling artist, who became best known for his hits "Superman" and "100 Years," has re-released his album, "Slice."

The album's first single, "Chances" got some play on the big screen, as the end-title song for the film, "The Blind Side," starring Academy Award-winning actress Sandra Bullock. "Chances" hit the Top 10 on the Hot Adult Contemporary chart and the Top 20 of the Hot Adult Top 40 survey.

Ondrasik stopped by "The Early Show on Saturday Morning"'s "Second Cup Cafe" to perform the title track from "Slice," and to do "100 Years."

Ondrasik has made its mark on history with the 2001 release of his Grammy-nominated hit, "Superman," which became a post 911 anthem.

"Superman" had already been climbing the charts before the terrorist attacks, but the catastrophic event brought more meaning to the song, which Five for Fighting performed at The Concert for New York City in late 2001.

In 2004, Ondrasik recorded the Platinum-certified album, "The Battle For Everything," and released "100 Years."

Ondrasik is also a guitarist, a pianist, and an avid sports enthusiast.

Why the name Five for Fighting if he's the main man?

He got it from an expression used in ice hockey -- when a player is sent from the rink by the referee for a major penalty, he gets five minutes in the penalty box for fighitng -- or -- five for fighting, as ther hockey term goes. Ondrasik thought that would be more catchy than his own name.

Ondrasik's lyrics often mimic his actions, in the sense that he is a philanthropist, as well. In February of 2007, Ondrasik launched a unique, charity-driven website, WhatKindOfWorldDoYouWant.com, which raises money for various charities. The website has drawn more than 3 million people and brought in donations of $300,000.

He is also a dedicated supporter of U.S. troops. In March 2007, he performed at Guantanamo Bay for service members on his first USO/Armed Forces Entertainment tour.

Since then, he's performed for U.S. forces on USO tours in Hawaii, Guam and Japan. Ondrasik has also conceived and produced "For the Troops," a CD compilation series of major recording artists, which is available for free to every active member of the U.S. Armed Forces.