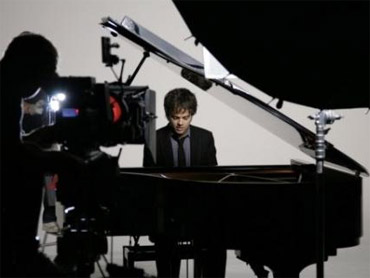 When British pianist and vocalist Jamie Cullum gets behind a piano, any musical concoction is possible.

And like a "warm drink that seeps into your soul," Cullum's jazz-induced music and addictive arrangements make fans long for happy hour.

The raspy-voiced Brit is back at it again after four years with his fifth studio album, "The Pursuit," which includes nine originals and five cover songs.

This week, the "David Beckham of Jazz" kicked off his world tour in New York City.

Whether he's covering songs from classic American singer/songwriter Cole Porter or fiery R&B star Rihanna, Cullum incorporates his playful spin while rocking out with his shaggy hair. Tapping into his musical genius, Cullum strips down complex arrangements to make them creatively simple, and breaths new life into older tunes.

He stopped by "The Early Show Saturday Edition"'s Second Cup Cafe to perform his version of Rihanna's "Don't Stop The Music" and his former hit song, "All At Sea."

Cullum has had an exciting rise to the top. His hit album in 2004, "Twentysomething" and its follow-up, "Catching Tales," were so successful that he was given the moniker "Sinatra in Sneakers."

He has landed some pretty impressive side projects, as well.

In 2007, Cullum was the singing voice of "Frankie The Frog" in the animated Disney feature "Meet The Robinsons." He went on to score two Golden Globe nominations for "Best Original Song" from the John Cusack film "Grace Is Gone" and Clint Eastwood's 2008's film, "Gran Torino."

Cullum, who turned 30 this year, joked that leaving his twenties behind was tragic. But, all joking aside, he told CBSNews.com that reaching the milestone was quite wonderful.

The multi-faceted Brit wins over audiences with his down-to-earth, boyish charm and English, self-deprecating humor, making him all the more loveable.

With a musical ability that oozes out of him, Cullum has the capability of transporting his audience to New Orleans -- almost making you believe he's not from the rural village of Hullavington, England.

As the biggest-selling British jazz artist of all time, Cullum takes it all in stride in his suit jackets and sneakers, as if he were just the silly, little kid next door -- who happens to be ridiculously talented.
By Melissa Castellanos