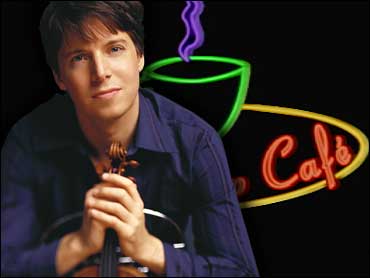 Virtuoso violinist Joshua Bell is an internationally known classical music superstar who has played with virtually every major orchestra and recorded dozens of albums in the last 20 years. He visits The Saturday Early Show to play songs from his new album, "Voice of the Violin."

Bell was born and raised in Bloomington, Ind. He received his first violin at age 4, after his parents, both psychologists, noticed him making sounds by plucking rubber bands he had stretched across the handles of his dresser drawers. By the age of 12, he was studying with renowned violin master Josef Gingold, who became his mentor.

At age 14, Bell earned national attention after his highly acclaimed orchestral debut with the Philadelphia Orchestra. Bell continues to perform regularly with top symphony orchestras around the world. He's also ventured outside the classical music world to team up with Josh Groban, James Taylor, Bobby McFerrin and Chick Corea.

Over the years Bell has developed an impressive catalog of recordings. He has three Grammy Awards and was named Billboard's "Classical Artist of the Year" in 2004 for sales of his album "Romance of the Violin."

Bell is no stranger to pop culture. He was one of the first classical artists to have a video air on VH1 and was in People Magazine's 50 Most Beautiful people issue.