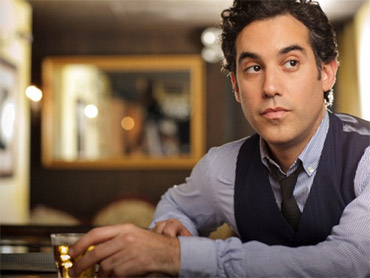 Cleveland-native Joshua Radin is a singer-songwriter whose songs have made him a "go-to-guy" for "Grey's Anatomy"-style folk ballads.

After more than 75 film and television placements, a performance at Ellen DeGeneres' wedding and several internationally-chart topping singles and albums, Radin returns with his much-anticipated third album, "The Rock and the Tide."

The album, which was released last month debuted, at No. 5 on iTunes and at No. 31 on the Billboard Top 200.

He stopped by "The Early Show on Saturday Morning"'s "Second Cup Cafe" to perform "Brand New Day" and "You Got What I Need."

Sensitive by nature, Radin, known for his soft sound, changes it up a bit with "The Rock and the Tide," which is more upbeat and rock and roll sounding.

He's wrapping up a tour with the Irish band, The Script and is gearing up to kick off a U.S. headlining tour.

How did Radin get his start?

He went to school to become a screenwriter and spent years after graduating writing and developing screenplays. One day, he happened to pick up a guitar to play and the chords came naturally to him. He then started to learn how to play his favorite Beatles and Bob Dylan tunes. Before he knew it, he was writing his own songs.

It was Radin's good friend, "Scrubs" actor Zach Braff, who helped him realize his talents. Radin wrote a song called "Winter" for Braff, and his career jumped off from there. His first album was released in 2007 and Braff insisted they use Radin's material on "Scrubs."

Since then, Radin's songs have been in over 75 TV shows, films and commercials, including "Grey's Anatomy," "House," and "Brothers and Sisters," and on soundtracks for movies like "Catch and Release," "The Nanny Diaries" and "The Last Kiss" (a soundtrack also produced by Braff).

Radin is also adored across the pond. He has a Top 10 album on the U.K. pop charts with little to no publicity or promotional push. Not too shabby, considering how much money is usually spent on publicity these days!