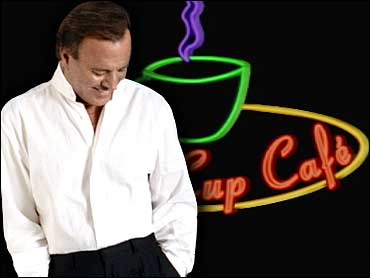 Spanish singer Julio Iglesias has had such a long and stellar career that it's difficult to write about him without sounding like a sportswriter rattling off a baseball player's batting statistics.

Iglesias is listed in the Guinness Book of World Records as the "Best-Selling Latin Male Singer" of all time. He's also one of the Top 10 best-selling recording artists of all time in any language or genre.

He's sold over 250 million records and has performed in thousands of concerts over a career that spans almost 40 years.

The Madrid-born crooner has released 80 albums in English, Spanish, French, Portuguese, Italian and German. His latest album, "Romantic Classics" is his first English language albums since 1994's "Crazy." He visits Second Cup Café — on his birthday — to sing songs from the new album.

Julio Jose Iglesias de la Cueva was born Sept. 23, 1943. In his early years, he hoped to study law and become a diplomat. He loved soccer and was briefly a goalie for the professional team Real Madrid until a near-fatal accident left him partially paralyzed.

During his almost two-year recovery, Iglesias spent a lot of time listening to music, reading poetry and eventually playing guitar. That led to him entering a prestigious song festival in 1968 and winning with his composition "La Vida Sigue Igual (Life Goes On)."

Soon after, he signed his first record contract and released his first album. By 1971 he had sold his first 1 million albums.

Throughout the 1970s and '80s, Iglesias topped charts around the world, and toured constantly.

In 1984, he released his first album in English, the multi-platinum album "1100 Bel Air Place." His duet with Willie Nelson, "To All The Girls I Loved Before," was a huge hit, and became his signature song in the United States.

In the past 20 years, Iglesias has continued to release records in multiple languages and sell out concerts on his world tours.

Iglesias is the father of seven children, although there is a large gap in age between his eldest and youngest kids. His eldest children are pop singer Enrique Iglesias, television personality Chabeli Iglesias, and model/singer Julio Iglesias Jr. In 1978, Iglesias separated from their mother, Isabel Peyser, and the couple divorced a year later.

Since 1990, Iglesias has been in a relationship with 40-year-old former model Miranda Rijnsburger. The youngest of their four children, the twins Cristina and Victoria, were born when Iglesias was 57 years old.

That may sound like a late age to have kids, but it's nothing compared to Iglesias' own father, the late Dr. Julio Iglesias Sr., who became a dad again at the age of 88. He fathered another child, Ruth, two years later, but died before she was born.

Not surprisingly, Dr. Iglesias was a respected gynecologist who founded the Madrid Maternity Clinic and became the head of its sterility, infertility and family planning unit.