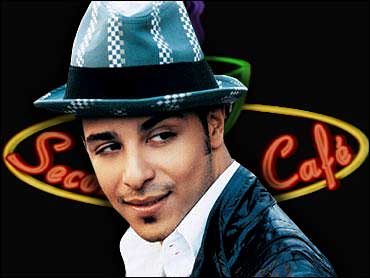 Mario Vazquez doesn't even have a record album out yet, but millions of fans of the reality show "American Idol" already know who he is. Vazquez was one of the 12 finalists during the show's 2005 season — and an early favorite to win. But after a few weeks in the finals, he decided to quit the show.

Vazquez says that he left the show because he wanted to control his own destiny as an artist. Soon after the show was over, Vazquez found himself auditioning for Arista Records honcho Clive Davis and the label's A&R staff.

Less than 24 hours later, Vazquez had a record contract. He visits Second Cup Café to sing songs from his self-titled debut album, due out Sept. 26.

Raised in the Bronx, Vazquez credits growing up in the New York area with giving him an eclectic taste in music. "The city is such a melting pot, and it's so open to all kinds of music," he says. "I want my album to be a vehicle for all of that — from Latin pop, $&B, hip-hop and soul to tracks that take me back to hanging out in the city's dance clubs as a teenager."

Both of Mario's parents are from Puerto Rico, and he's proud to show off his "Nuyorican" roots in the new album. The songs of the album are in Spanish, English and "Spanglish" — a combination of the two.

The first single off the album is "Gallery," written by R&B singer-songwriter Ne-Yo.