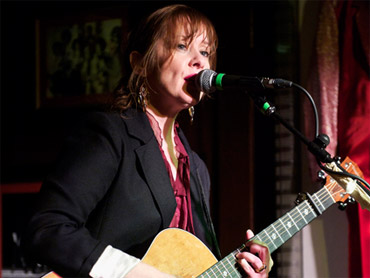 Suzanne Vega has a mega music career that stretches across two decades.

Her latest project, "Close-Up," finds her re-recording her catalog and organizing the songs around themes. Of the four volumes planned, Vega has released the first two, "Love Songs" and, last month, "People & Places," which include her smash hits "Luka" and "Tom's Diner."

What should fans expect this time around?

"Close-Up, Vol. 2, People & Places," which was released on Oct. 12, features new, acoustic versions of some of her greatest songs about people and places that have inspired her.

She stopped by "The Early Show on Saturday Morning"'s "Second Cup Cafe" to perform "Luka" and "Tom's Diner."

Versions of "Tom's Diner," which was done a cappella, has been a hit with some of the biggest names in the industry. It has been remixed well over 50 times, including most famously by DNA, but also Will Smith, REM, Tupac, Jars of Clay, Destiny's Child, Lil Kim, and Ludacris and, more recently, Dangermouse, Drake, and Kid Cudi.

Born in Santa Monica, Calif. on July 11, 1959, Vega moved to New York City when she was just one year old. While she got a bumpy start in her childhood, she thrived in school throughout her teen years.

As an outlet, she began writing poetry at the age of nine and songs when she was 14. She attended New York High School of Performing Arts -- the "Fame" school -- where she studied modern dance.

Music ended up becoming Vega's forte and, although she was an English lit. major at Barnard College, Columbia University, she would go down to the Village to perform at small venues. In 1984, she landed a gig with a major record label after she received an enthusiastic review in the New York Times.

Today, Vega lives in Upper Manhattan with her daughter, Ruby.

Where is she headed next?

She will headline a benefit concert at the Housing Works Bookstore Cafe in NYC Sun Nov. 14 and a share a bill with Marc Cohn at Town Hall Jan. 8.