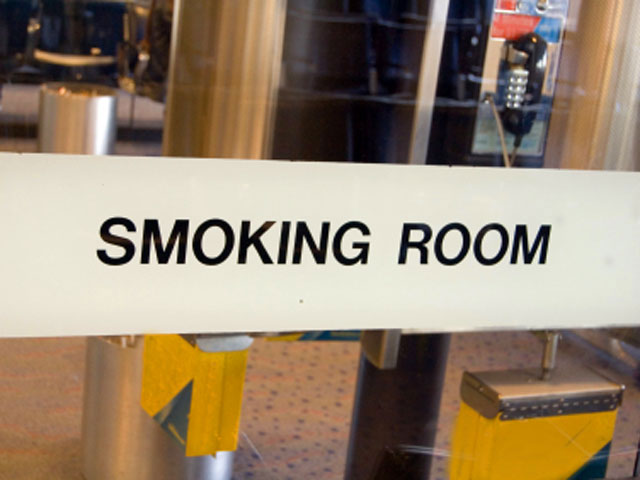 Ahead of Thanksgiving, one of the busiest traveling days of the year, the Centers for Disease Control and Prevention has released a report that shows secondhand smoke is a major problem at some major U.S. airports.

The CDC's study focused on five of the 29 largest airports in the country that allow smoking in designated smoking areas.

"Instead of going entirely smoke-free, five airports continue to allow smoking in restaurants, bars or ventilated smoking rooms. However, research shows that separating smokers from nonsmokers, cleaning the air and ventilating buildings cannot fully eliminate secondhand smoke exposure," report co-author Brian King, an epidemiologist with the CDC's Office on Smoking and Health, said in a press release. "People who spend time in, pass by, clean or work near these rooms are at risk of exposure to secondhand smoke."

The CDC's report, published Nov. 20 in its journal Morbidity and Mortality Weekly Report, tracked air quality at the five airports, comparing it to four large-hub airports that prohibit all indoor smoking.

"Smoke-free policies at the state, local or airport authority levels can eliminate involuntary exposure to secondhand smoke inside airports and protect employees and travelers of all ages from secondhand smoke, the researchers wrote.

That means many of them are facing health risks from secondhand smoke, which a 2006 Surgeon General Report deems there is no risk-free level of exposure. Potential health risks include heart disease, lung cancer, respiratory infections, asthma attacks and an increased risk for sudden infant death syndrome (SIDs).

While smoking in airports may be a problem, a recent study in the Nov. 12 issue of Pediatrics found many parents smoke in cars with their children present, increasing risks to their health.

However, even stepping outside in a designated smoking area is not enough, warns the CDC.

The CDC has more information on secondhand smoke.