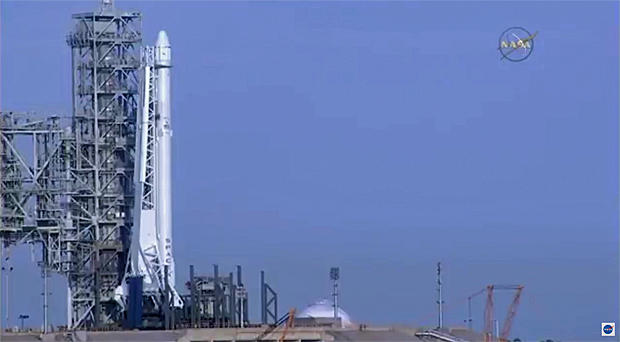 Launch of a SpaceX Falcon 9 rocket carrying a Dragon cargo capsule loaded with nearly 5,500 pounds of supplies and equipment bound for the International Space Station was aborted just 13 seconds before liftoff Saturday because of possible problems with the booster’s second stage steering system.

The flight, the first using historic pad 39A at the Kennedy Space Center since the end of the shuttle program, was tentatively rescheduled for Sunday, at 9:38:59 a.m. EST (GMT-5), if the thrust vector control issue can be resolved in time. The weather is expected to be favorable.

Thrust vector control, or TVC, systems use hydraulic pistons to push and pull on engine nozzles during flight to keep the rocket on the proper trajectory. Elon Musk, SpaceX founder and chief designer, said readings showing the position of a piston in the Falcon 9’s second stage TVC system were not what engineers expected.

“All systems go, except the movement trace of an upper stage engine steering hydraulic piston was slightly odd,” he tweeted. “Standing down to investigate.” He added a few minutes later, “if this is the only issue, flight would be fine, but need to make sure that it isn’t symptomatic of a more significant upstream root cause.”

Musk said the launching likely would have gone well, thanks to a control system that would have “overcome” the steering system positioning error, “but that 1% chance isn’t worth rolling the dice. Better to wait a day.”

John Federspiel, a SpaceX mechanical design engineer, said on a company webcast the decision to stand down was made “out of an abundance caution.”

Engineers also ran into problems with software in the Falcon 9’s automated flight termination, or self-destruct, system, but that issue was resolved in the final minutes of the countdown.

The only other problem going into Saturday’s countdown was detection of a small leak Friday in the helium system used to spin up a second stage engine turbopump. A software check was put into the terminal countdown and the leak apparently was within acceptable limits Saturday.

The launch delay was frustrating to area residents and tourists who turned out in force to witness the first launch off pad 39A since the shuttle Atlantis blasted off in July 2011 on the program’s final flight. But problems during the first launch off a heavily modified launch pad were not unexpected and NASA approved the decision to delay.

The primary goal of the flight, the 30th of a Falcon 9 and the first from Florida since a spectacular explosion Sept. 1 during a pre-launch test at the nearby Cape Canaveral Air Force Station, is to boost the Dragon capsule into orbit for a two-day flight to the International Space Station.