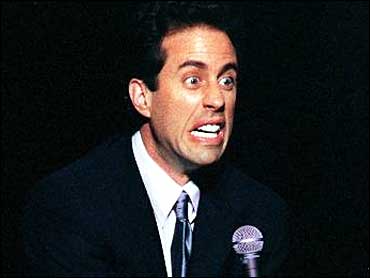 What happens when voters won't let either party win – over and over again? In his latest Against the Grain commentary, CBSNews.com's Dick Meyer says just look at Washington and see.


Rarely have the spoils of the American political system been as evenly divided between the two parties as they are today.

A president who lost the popular vote occupies the White House. The Senate is divided 50-49-1. The House is more closely split than it has been since 1955.

As close as the election of 2000 was, it wasn't a fluke. It followed a series of close elections and this year's looks sure to be another close one.

The political season has been so boring that it has been crowned the "Seinfeld Election" – an election about nothing. The quantity of television news coverage appears to be at an all-time low. The country is split right down the middle between two brands of vanilla.

No one would have thought this was possible two years ago. Close but dull elections just two years after the Battle of Florida? Absurd.

No one would have thought this was possible one year ago. A passionless, themeless, tactical election barely a year past 9/11, the most traumatic event of a generation? Don't be silly.

If the lethargy of the election wasn't predictable, its closeness is.

Last summer Michael Barone, author of the biennial classic, The Almanac of American Politics, wrote a terrific article called "The 49 Percent Nation" (it appeared in the National Journal, a subscription site that we can't link to, sorry).

His thesis: "The United States at the end of the 20th century was a nation divided down the middle."

To find precedent for this kind of political gridlock, Barone says you have to go back to the 1880's, "the last decade when a president was elected despite trailing in the popular vote, and when the Senate was equally divided between the two major parties."

The Big Split, the notion that we're in a prolonged political dead heat, is going to be the official Big Idea of this election. (See Mickey Kaus's "Fifty-Fifty Forever" in Slate.com and "50-50 America" in The Washington Post.)

I think this is a valid Big Idea primarily because I agree with it and have been spouting off about it for quite a while. It's also pretty hard to argue with the facts.

I suppose the Big Question for the Big Idea is, "why?"

The nation is not torn apart at this point in history. Ideological gulfs are not especially wide today. In fact, there is an unusually narrow range of philosophies in politics now, especially compared to recent American history or to European politics.

Barone argues that there is a fundamental religious and cultural schism in the country, that there are "two nations of different faiths. One is observant, tradition-minded, moralistic. The other is unobservant, liberation-minded, relativistic."

He argues the issues that divide most deeply – abortion, gun control and environmentalism – are absent from political campaigns. But they are big deals to the "two nations" that are symbolized by the vacation spots of two presidents – Martha's Vineyard and Crawford, Texas.

Interesting. But I don't believe that people fall easily into these two camps. I don't see any cultural split that is so tidy, so pronounced and so even. And suppose these two "nations" do exist, how could they be in such perfect demographic balance? Unlikely.

My rather more prosaic and perhaps cynical view is that the Big Split is primarily about political markets.

I can't make my case out of demographics and public opinion data, so I'll go straight for my gut hunch and some social mysticism.

Political consumers – voters-- are so profoundly mistrustful of the professional political class that the equivalent of Adam Smith's "invisible hand" guides them away from giving either of the two political corporations a complete victory, a majority of market share or unchecked power.

Further, the way that political products – candidates – are mass-marketed to the public through either "paid media" (ads) or "free media" (TV news) reinforces the view of political consumers that there is little difference between the product lines. Little is at stake in elections. And neither of the two major brands can be trusted.

That's why close elections can also be boring. It's McDonalds's vs. Burger King, Coke vs. Pepsi.

The bright side of this picture is that our skepticism about parties and politicians is not something that divides us. It unites us.