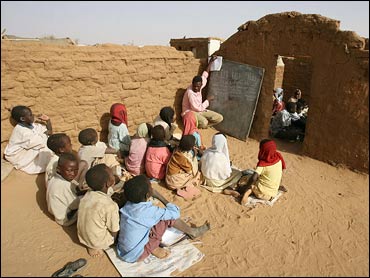 This column was written by the editors of The New Republic.

Here we go again. "The coming weeks and months," explained U.N. Secretary-General Ban Ki-moon in late July, "will be a crucial period in the quest for peace in Darfur." He is right. But so was the U.N. official who told a Washington Post reporter in July 2004--as it slowly dawned on the world that a genocide was underway in Darfur--that "[t]he next few months will be a moment of truth for Sudan." So was Kofi Annan when he declared on the New York Times op-ed page in April 2005, "Time is running out for the people of Sudan"--and when, 17 months later, he informed the U.N. Security Council that "the tragedy in Darfur has reached a critical moment."

For the last four years, Darfur has known only crucial periods and critical moments. Through it all, as the diplomats in New York debated, two things remained constant: The killing never stopped. And the help they spoke of never arrived.

Now another key juncture has appeared, in the form of a U.N. resolution--ratified late last month--providing for a joint United Nations-African Union force to deploy to Darfur and protect civilians. On the surface, this would seem to be a moment for optimism. The resolution would increase the number of troops patrolling Darfur from just 7,000 to 26,000; and, unlike an August 2006 resolution that also called for the deployment of U.N. troops, this one was not immediately rejected by Khartoum. What's more, on the heels of the U.N. resolution came news that representatives of various Darfuri rebel groups had managed to unite around common negotiating positions--a necessary, though not sufficient, precondition to peace talks between the insurgents and the Sudanese government.

We wish we could say these developments augured an end--finally--to the Darfur genocide. But the reality is that this crucial moment will, in all likelihood, conclude no differently from all the others. Everyone who has paid even scant attention to Darfur over the years knows that the Sudanese authorities will use every means at their disposal to slow the arrival of additional forces. Already this game has begun anew, with Khartoum seeking to complicate the international community's efforts by insisting that most peacekeepers sent to Darfur be African. Even under a best-case scenario, even in the absence of whatever new roadblocks Sudan's leaders devise, it would take many months before the international force in Darfur could possibly reach 26,000 troops.

This delay is central to Sudan's strategy. For, as the United Nations goes about the lengthy process of preparing a force--and as political negotiations between Khartoum and Darfuri rebels drag out, as they likely will given the gulf that separates the two sides--the gruesome work of genocide can go on, just as it has through all the crucial periods and critical moments of the past four years. And not only the killing and rape and destruction: In an ominous development suggesting that the genocide is now entering its final phase, reports have surfaced of Chadian Arabs crossing the border into Darfur to settle land once owned by African tribesmen. As many as 30,000 migrants, mostly Arabs, have recently arrived in Sudan from Chad. The longer peacekeepers take to deploy in substantial numbers, the more time Khartoum and its local allies have to permanently alter Darfur's demography.

Speed, then, is essential. Yet speed--as Darfuris, Bosnians, Rwandans, and Kosovars can all attest--is not exactly a strong suit of the United Nations. That is where America comes in. For there to be any chance of peace in Darfur, the United States and its allies must do what the United Nations, by its very nature, cannot: use every manner of coercion--including the credible threat of military force--to push Khartoum toward admitting peacekeepers immediately and accepting a quick and reasonable resolution to negotiations with rebels.

Is this a long shot? Absolutely. But, save for an outright nato invasion of Darfur--an option we favor, but for which there is simply no political will at the moment--an accelerated U.N. deployment backed by American threats may be the best course available. At the very least, we must try to make it work, and soon. Because the day is fast approaching when the Africans of Darfur will be out of crucial periods and critical moments forever.
By the editors of The New Republic
If you like this article, go to www.tnr.com, which breaks down today's top stories and offers nearly 100 years of news, opinion and analysis