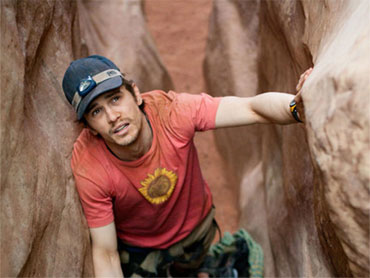 Aron Ralston's story captured the world's attention back in 2003 when he cut his own arm off.

Ralston was hiking in Utah when his hand and forearm became pinned between a fallen boulder and a canyon wall.

After being trapped for five days in excruciating pain, Ralston saved his life by amputating his arm.

Now, his compelling story of survival and self-discovery has been made into a film, called "127 Hours," starring James Franco and directed by Danny Boyle (of "Slumdog Millionaire" fame).

On "The Early Show" Wednesday, Ralston shared his story in his own words with co-anchor Harry Smith.

Between A Rock And A Hard Place
PICTURES: Fall Films 2010

Smith said, "The odds of something like this happening have to be one-in-incaculable, right?"

Ralston said, "It does happen from time to time, but certainly, for me, the day going out there, (it was) the last thing I thought would happen. This was a walk in the park for me."

Smith noted that Ralston was in his element out in the wilderness.

"If I had to break it down," Ralston said, "there were kind of about two trains of thought happening almost every moment. One, the logistics, taking stock, problem-solving, trying to figure out how to get out, keep myself alive, how to stay warm, what could I do to ration the very little water I had, and ultimately recycling that water. But then, the other was the emotional aspect of what I was experiencing, connecting me with my family, my loved ones. Part of the time, I used my video camera that I would hold out in front of me and record myself saying my good-byes to my parents and to my sister and to my closest friends."

Why did Ralston go forward with Danny Boyle's telling of his story?

Ralston explained, "Because we shared a common vision for this. ... What was important to me was the authenticity of my story being shared with people, that we also inspire audiences, instead of using it maybe as a horror film or something that just would have -- perhaps left people in a hole, we wanted -- I wanted people to be uplifted with it, to have that hope in the end."

Smith pointed out Ralston was on-location -- where it all happened back in 2003 -- to make sure his story was being told accurately.

Ralston added, "It was also from their invitation. That was the way Danny made the film was that he wanted my involvement, so it was reassurance, too."

But what about the film? Smith said at the point at which Ralston makes his life-and-death decision of cutting off his own arm, some people are actually becoming sick and crying in the screenings.

"I was crying," Ralston said.

Ralston said he's relived his ordeal 10 times through the film's screenings.
He said, "And still, last night, I watched it, and I still am brought to a point -- they're tears of gratitude, really, to be there watching it with my wife or with my mom, the closest people, those are the people who -- that's why I got out of there, was because of the love that I have with them. And you see it in the film, too, these vignettes, and then in the end, there's a scene around a couch and it's my actual family and my friends who are there supporting me, as they did in my real life. And that's -- that was the power of love and the desire for freedom, and those two things put together are why I got out of there."