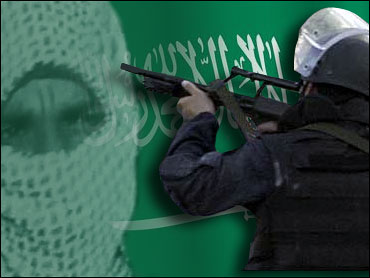 This column was written by Robert Scheer.

Go figure: From the White House comes the news that self-styled anti-terrorism crusader George Bush wants to sell $20 billion in high-tech military equipment to Saudi Arabia, the source of most of the financing, and fifteen of the nineteen hijackers, for the September 11 terrorist attacks on the United States.

The justification can't be that this is yet another boondoggle for the military-industrial complex — the big winner in the war on terror — so we are told instead that the Sunni-dominated Saudi kingdom needs this weaponry to withstand a future challenge from those dastardly Shiite fellows in Iran.

Yes, the very same extremists whose surrogates are now, as a consequence of the U.S. invasion, pretending to be the indigenous government of Iraq. Recall that the Shiite militants who rule Tehran, along with the Sunni nuts around Osama bin Laden, were both the sworn enemy of Saddam Hussein. Now both of those forces are the main players, according to the Bush Administration, vying for power in "liberated" Iraq, and our president is in the inane position of playing one group of fanatics against the other in the name of securing Iraq as a democratic haven.

White House officials told The New York Times that Secretary of State Condoleezza Rice and Defense Secretary Robert M. Gates intend to use the occasion of their joint visit to Saudi Arabia "to press the Saudis to do more to help Iraq's Shiite-dominated government." Huh? Why in the world would the Sunnis, who control Saudi Arabia and are frightened to their bones of Shiites throughout the Gulf, be party to consolidating Shiite power in Iraq?

To complete the circle of madness, White House officials tell reporters that the hope of the latest arms sale program is that the Saudis will be so thrilled with their new weapons that they will stop funding the Sunni insurgents who are currently killing Americans. The absurdity of this position is that it makes the Saudis the big winners in the war on terror and yet expects them to cut out behavior that has played so effectively to the kingdom's advantage. The nation that was most directly responsible for spawning the original al Qaeda attacks on the U.S., and which has since helped finance the violence in Iraq, is now being rewarded with a long-sought weapons modernization package. Thus, a new generation of deadly toys finds its way into the volatile Mideast.

Embarrassing facts undermining Bush's insistence that Iraq is the key battleground in the war on terror are that al Qaeda, which was not allowed a presence in Saddam Hussein's Iraq, is now said by Bush to be behind the insurgency and that half of the foreign suicide bombers have been Saudi nationals. Why would the Saudis now move to stem the flow of terrorists across their border when Bush is rewarding them so handsomely for their past support of terrorism? After all, this administration has never demanded an accounting from the Saudis for the kingdom's support of the Taliban government when it was coddling Saudi terrorist financer Osama bin Laden. Nor has Bush's camp ordered any serious examination of just how fifteen Saudi "soldiers" were recruited, and provided with legitimate Saudi passports and American visas, to commit the mayhem for which the Iraqi people have been so severely punished.

While the $20 billion weapons package will no doubt be supported vigorously by lobbyists for a defense industry that stands to make a financial killing from the deal, it is expected to meet opposition in Congress, particularly from those who fear the impact of this new weaponry on the security of Israel. No problem — "senior officials" in the White House assured the Times that the Saudi arms package would be balanced with a $30.4 billion military aid package for Israel. Then, of course, some large amount of military "aid," to the tune of $13 billion, will also have to be extended to Egypt to keep the dictator in Cairo on board.

What a deal! The Saudis pony up billions in cash, American taxpayers come up with an amount more than twice as high to keep the Israelis and Egyptians happy, and U.S. war profiteers, Bush's most reliable core constituency group, make out like bandits. Hey, it's only money, and the only real cost might be to folks who get caught in the line of fire of those weapons in wars to come for generations. But not to worry: Most of them don't vote in U.S. elections anyway.

By Robert Scheer
Reprinted with permission from The Nation