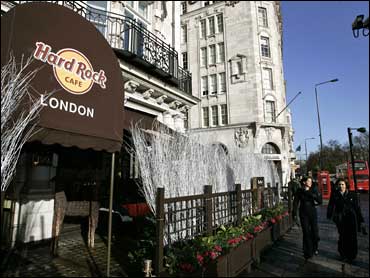 The Seminole Tribe of Florida is buying the Hard Rock business, including its massive collection of rock 'n' roll memorabilia, in a $965 million deal with British casino and hotel company Rank Group PLC, the tribe announced Thursday.

With it, the tribe acquires what is said to be the world's largest collection of rock memorabilia, some 70,000 pieces including Jimi Hendrix's Flying V guitar, one of Madonna's bustiers, a pair of Elton John's high-heeled shoes and guitars formerly owned by Bob Dylan, Eric Clapton and Chuck Berry.

Cypress and Seminole Gaming Chief Executive James Allen said in a statement that the tribe would work with current Hard Rock International management to build on existing growth plans.

In addition to its two Seminole Hard Rock hotels & casinos, the Seminole Tribe owns and operates five other casinos in Florida. More than 90 percent of the tribe's budget now comes from gaming revenue.

Nearly 3,300 Seminole Indians live on and off reservations throughout Florida.

The tribe was the first American Indian group to get into the gambling business when it opened a bingo hall in 1979 in Hollywood, Fla. That led to other casinos on reservations in Florida and sparked the interest of other tribes across the nation.

U.S. tribes now have more than $22 billion in annual revenues from gambling, according to government figures.

Peter Morton, co-founder of the Hard Rock brand, sold his interests to Rank Group in 1996 for $410 million. He had retained ownership of the Hard Rock Hotel and Casino in Las Vegas, but sold that to Morgans Hotel Group Co. for $770 million in cash in May.

Rank, which said the sale freed it to concentrate on gambling, retained the Hard Rock Casino in London and plans to change it to the Rank Gaming brand.

"We have maximized the value of Hard Rock through this disposal following a thorough strategic review and competitive auction," said Rank Chief Executive Ian Burke.

Burke said the company would return $690 million of the sale proceeds to shareholders in a special dividend of $1.28 per share.

The sale, which is subject to shareholder approval, is scheduled to be completed in March.