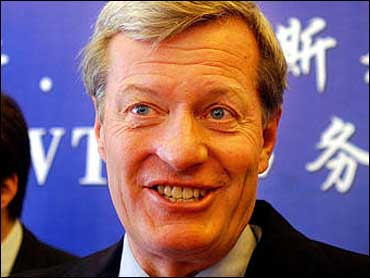 (AP)
The head of the Senate Finance Committee, the last congressional committee expected to produce its health care reform bill, announced today he will unveil legislation next week and bring the measure to a vote within two weeks, with or without Republican support.

Sen. Max Baucus (D-Mont.) has been trying, with two other Democratic committee members and three Republicans, to forge a health care bill that could win some Republican votes. Yet after months of talks, the so-called "gang of six" has yet to finalize any legislative language. Baucus reportedly said today the legislative process must move forward.

"The time has come for action, and we will act," Baucus told reporters, CNN reports.

Baucus on Tuesday released a framework for legislation that he believes could clear his committee. He gave the gang of six until Wednesday morning to submit suggestions for changes. Baucus met with Democratic members of the Senate Finance Committee this morning and met with the gang of six this afternoon.

After his meeting with the Democrats, Baucus said he would bring a bill before the entire Finance Committee for consideration the week of Sept. 21, the New York Times reports.

"Irrespective of whether there are any Republicans, I will move forward," Baucus reportedly said.

Sen. Chuck Grassley (R-Iowa), one of the Republicans in the gang of six, said a news conference today ahead of the group's meeting that he has suggested some changes to Baucus' framework, but he declined to say expressly what changes.

"I do have a list of changes," he said. "I won't bring those up at this point, because I don't want to negotiate in the press."

Grassley said all proposals are on the table, as they were months ago, when the gang of six began its negotiating process -- though he admitted a government-run health insurance plan, or "public option" will not be in any legislation they produce.

"One of the rules of negotiating is that nothing's final until everything's final, and so you either agree to the entire package or you don't," he said.

Baucus' announcement that he may bring his bill to a vote without Republican support is an acknowledgement that the rest of Congress and President Obama most likely will no longer wait for the gang of six to agree to an entire package.

When asked about the Senate Finance Committee proposal, Rep. Mary Louise Slaughter (D-N.Y.) said today that she had no idea what they're going to do and is not sure anyone does.

"It's like waiting for Godot, and I don't want to spend my life doing that," she said.

Obama: "Now Is the Season for Action"