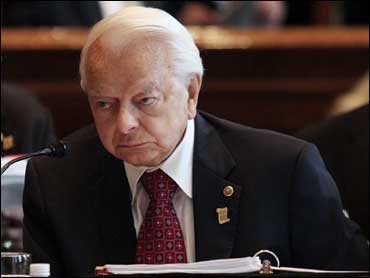 (AP Photo/Lauren Victoria Burke)
West Virginia Democratic Senator Robert Byrd has been admitted to the hospital following a fall at his home outside of Washington. In a release, his office said the senator is "expected to remain there for a few days."

"Byrd was taken to the hospital this morning as a precautionary measure following a fall at his home which was likely caused by standing up too quickly," according to the release. "While having no broken bones or bruises, upon examination, doctors found an elevated white-blood cell count which can be an early sign of an infection. Therefore, his doctors have determined that Byrd should remain in the hospital for antibiotic treatment and observation."

The release added that the 91-year-old Byrd is in "good spirits" and is disappointed that he could not be there for the biennial Senate photo.

Byrd, the longest serving senator in the body's history, was hospitalized earlier this year with a staph infection and has been absent from the Senate for most of the year.

First elected in 1958, Byrd is the president pro tempore of the Senate, which puts him third in line in presidential succession. He gave up his chairmanship of the Appropriations Committee in January amid concerns about his health.