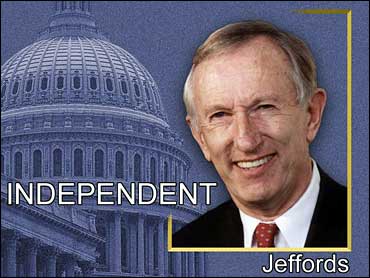 Vermont Sen. Jim Jeffords, an independent who triggered one of the most dramatic upheavals in Senate history when he quit the GOP four years ago, announced Wednesday that he will retire at the end of his term next year.

"After much thought and consultation with my family and staff, I have decided to close this chapter of my service to Vermont and not seek re-election in 2006," said at a news conference at a suburban Burlington hotel.

Jeffords, 70, has been adamant in saying he will seek re-election, but there have been increasing concerns voiced about his health in recent weeks. He has suffered from a bad back and neck for years and lately has seemed confused by some questions in several news interviews.

The health of Jeffords' wife, Liz, has also been a concern. She is battling cancer.

Jeffords' surprise decision will unleash a host of candidates to replace him in the predominantly Democratic state. U.S. Rep. Bernie Sanders, the state's only congressman and the only independent in the House, has said he would run if Jeffords did not. Like Jeffords, he votes with the Democrats. Vermont's other member of the Senate is Democrat Patrick Leahy.

Former Gov. Howard Dean, now the chair of the Democratic National Committee, had long been rumored as a possible candidate. But Karen Finney, a top aide to Dean, said the former Vermont governor and 2004 presidential hopeful will not run for the Senate because he's committed to his new duties at the DNC.

Jeffords was elected as a Republican to the U.S. House in 1974 and to the U.S. Senate in 1988, but he abandoned the party in 2001 because of disagreements with the Bush administration.

"In order to best represent my state of Vermont, my own conscience and principles that I have stood for my whole life, I will leave the Republican Party and become an independent," said Jeffords on May 24, 2001.

At the time the Senate was evenly divided, and Jeffords' decision to become an independent and caucus with the Democrats put the Democrats in charge of the Senate. They retained power until after the 2002 elections.

The GOP now holds 55 Senate seats to 44 Democrats, with Jeffords as the lone independent.

Jeffords continues to vote with the Democrats and was a major fund-raiser for them last fall.

He has hired campaign staff and has more than $2 million in his campaign account.