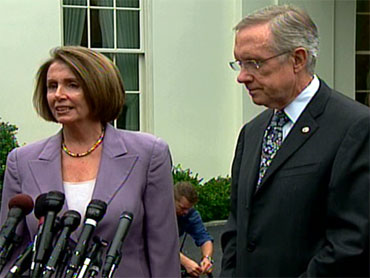 (CBS)
After meeting with President Obama and House Speaker Nancy Pelosi, Senate Majority Leader Harry Reid said today that health care reform is 90 percent done and that Republicans still have a seat at the negotiating table.

President Obama has often said that Republicans and Democrats can agree on 80 percent of the health care reforms Congress should enact -- that it is the remaining 20 percent that has stalled legislation.

"In our conversations today, we think we're up to 90 percent," Reid said from outside the White House. "We have 10 percent to work on, and we can do that."

The majority leader also said the Congress is still taking a bipartisan approach to reform and would not consider reconciliation -- a voting procedure that would allow Democrats to bypass Republican opposition -- unless there was no other choice.

"We still, after all these months, still have a place at the the table for Republicans," he said. "We do not want to do reconciliation unless we have no alternative."

Reid and Pelosi said the president did not give them a preview of the speech he will deliver to a joint session of Congress Wednesday night. However, Reid said the president will give a clear outline of the type of health care bill he envisions.

"I have every belief that when he finishes his speech tomorrow the American people will be able to put aside some of the ridiculous falsehoods that have been perpretrated."

Pelosi said the speech will be a "very important factor in how we go forward."

Both Reid and Pelosi said majorities in their respective chambers support a government-sponsored health insurance plan, or "public option" -- a plan the president supports but says is non-essential. Pelosi, on the other hand, repeated her assertion today that the public option is "essential to passing a bill." Reid said the Senate would do its best to include a public option or something like it in its final bill.

Pelosi said a public option should be favored by the insurance industry over the "trigger" option that has been discussed -- which would enact a public option some years down the road if the private insurance market failed to meet certain standards.

"I think they'll have a tougher public option to deal with" once the trigger is pulled, she said.

Sen. Max Baucus, the head of the remaining Senate Committee that is expected to release a health care bill, released a framework today of his health care reform proposals, which do not include a public option.

Pelosi reiterated Reid's point that much of the heavy lifting has been accomplished. She pointed out that three bills have passed out of committee in the House and one in the Senate.

"We have plenty to work from to pass comprehensive, affordable, accessible, universal, health care... in a fiscally sound way," she said.