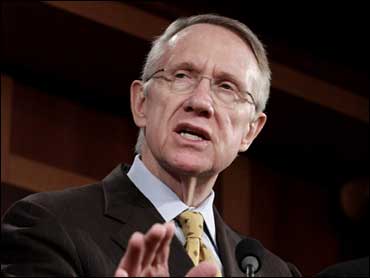 The publisher of Nevada's largest newspaper said Tuesday he has met with U.S. Sen. Harry Reid since the Democratic majority leader told the newspaper's advertising director that he hopes it goes out of business.

Las Vegas Review-Journal Publisher Sherman Frederick told The Associated Press on Tuesday that he thought it would be inappropriate to say what he and the senior Nevada senator discussed at the meeting because it was off the record.

"He didn't pull a knife on me or anything. He didn't wrestle me to the ground and give me a noogie," Frederick said. "Things can get pretty intense sometimes in some public disagreements, but that doesn't necessarily translate into personal disagreements."

Reid's office also declined to discuss the meeting. However, a Reid spokesman said Tuesday the comment made last week before a Las Vegas Chamber of Commerce luncheon was nothing more than a dry joke, consistent with Reid's sense of humor.

"I hope you go out of business," Reid said as he greeted Bob Brown of the Review-Journal, according to the newspaper.

Reid then said during his speech at the luncheon that he wants the Review-Journal to keep selling ads, because another local newspaper, The Las Vegas Sun, is delivered along with it under a joint operating agreement.

Frederick wrote in a Sunday column that he considered the remarks a "full-on threat," writing that Reid should serve Nevadans, not "sound like he's shaking them down."

"Yes, the senator said those things, but clearly he wasn't serious," Brede said. "This was in no way a threat. Sen. Reid doesn't want to see any Nevadans lose their jobs."

Frederick told the AP that he took Reid's comments seriously because thousands of people depend on the newspaper for their livelihood. He said Reid is a powerful senator and could punish the Review-Journal economically if he wanted to; he did not elaborate.

Frederick added that Brown told him the remark was delivered seriously, not as a joke.

"He was not laughing. It was not said in a social context in which there was a lot of joking going on," Frederick said. "It sounded like a threat to me. Our guy took it as a threat."

The newspaper devoted an entire page on Tuesday to run 15 letters to the editor about the flap. The page included a cartoon depicting Frederick and Reid holding guns as if they were about to face off in a duel. A front-page report said the flap has drawn thousands of comments to the newspaper as political bloggers picked up on the story.

Frederick and the newspaper's editor have a history of expressing conservative opinions that differ from Reid's, and the paper has often criticized the senator. The newspaper said last month that a poll it commissioned showed Reid would be beaten by any Republican in next year's election. Reid is hoping to remain in his current post.

Frederick said he and Reid get along in social settings.