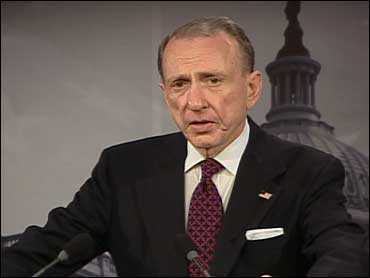 Pennsylvania Senator Arlen Specter took another step in his political transformation on Tuesday, telling hundreds of labor activists that he will support legislation that would make it easier to form unions.

In a speech to the AFL-CIO convention, Specter also boldly predicted a compromise version of the bill would be passed in Congress this year. The bill has been stalled for months under withering attack from business groups and a lack of support from several moderate Democrats.

"We have pounded out an employees' choice bill which will meet labor's objectives," Specter told cheering union delegates.

Meeting with reporters, Specter said the compromise would drop a controversial provision that would give workers the right to form unions by signing cards instead of holding a secret ballot election.

Organized labor has long insisted the "card check" language was necessary to give workers the freedom to organize without intimidation from company managers during the days leading up to secret ballot elections. However, union leaders now indicate they are willing to drop the "card check" demands in favor of other provisions that would help unions fill their depleted ranks.

Specter said the compromise would also speed up the process for holding secret ballot elections to certify unions and call for binding "baseball style" arbitration when workers and management cannot agree on a first contract. And it would allow unions organizers some access to the workplace before elections.

Specter told reporters he is confident that, once a new senator from Massachusetts is in place, Democrats will have the 60 votes needed to overcome an expected Republican filibuster. Such news would be a major blow to business groups opposing the measure.

Specter spoke just hours before President Barack Obama addressed the delegates. Later Tuesday, Obama was to attend a fundraiser for Specter in Philadelphia, where he was expected to tell donors how crucial Specter is for pushing through the White House agenda.

Specter's assurance was a reversal from his stance earlier this year, when he declared on the Senate floor that he could not vote for the Employee Free Choice Act. Since then, Specter switched from the GOP to the Democratic Party, giving Democrats a 60-vote majority in the Senate.

In reversing his position, however, Specter may have alienated former allies. The Workforce Fairness Institute (WFI) issued a statement earlier today responding to Specter's announcement.

"For months, Senator Specter has told Pennsylvanians he would stand up for worker rights, by protecting the secret ballot, and preventing mandatory, binding arbitration which would invite the government into the workplace, forcing contracts on workers and small businesses," said Katie Packer, executive director of the WFI. "Yet, today, Specter reveals that he has made a backroom deal with union bosses to assure their support come election time."

U.S. Chamber of Commerce attorney Steven Law said the groups' top concern is not "whether the AFL-CIO has cut a new back-room deal on the bill."

Instead, "it is whether it can be sold to Senate moderates who are worried about saving jobs, especially their own," Law said.

Facing a strong primary challenge from Pennsylvania Rep. Joe Sestak, Specter is counting on union support to help him hold onto his seat. Sestak is not speaking at the convention.

President Obama has told union leaders he would work to pass the union bill once health care reform is done.