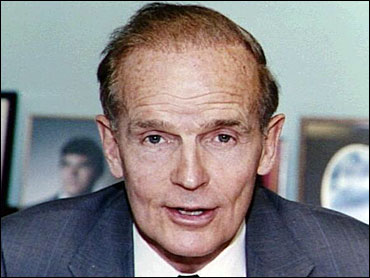 The 90-year-old Proxmire, who suffered from Alzheimer's disease, died around 1 a.m. EST Thursday at Copper Ridge, a convalescent home in Sykesville, Md., Copper Ridge spokeswoman Mindy Brandt said. She said she could not provide any details about his death.

Well respected for his intelligence and hard work, Proxmire was also a thorn in the side of political leaders and lobbyists during his three decades in the Senate, reports CBS News correspondent Bob Fuss. He waged a tireless campaign against wasteful spending large and small, complaining of billion-dollar boondoggles and trying once to stop construction of a new Senate gym.

He is perhaps best known for his annual "Golden Fleece" awards, in which he singled out particularly wasteful use of the taxpayer's money.

"Senator Proxmire leaves behind an unparalleled legacy as a defender of the American taxpayer and one of the hardest working Senators in U.S. history," said Sen. Russ Feingold, D-Wis. "Whether he was handing out his Golden Fleece Awards to keep government waste in check or casting one of his more than 10,000 roll call votes, William Proxmire always had the people of Wisconsin at the forefront of his mind."

Proxmire, who also became a familiar face on the television network Sunday news shows, was elected to the Senate in 1957 in a special election to fill the seat left vacant by the death of Sen. Joseph McCarthy.

Long before the McCain-Feingold campaign finance reform law was a twinkle in the eye of lawmakers, and at a time when millions were spent campaigning for Senate seats, Proxmire made a point of accepting no contributions. In 1982 he registered only $145.10 in campaign costs, yet gleaned 64 percent of the vote.

Over the years, the rebel Democrat developed an image of penny-pinching populism that played well with his homestate voters. But his support of the expensive system of dairy price supports — widely criticized by others as symbolic of government largess gone amok — won him strong backing from his state's dairy farmers.

The son of a wealthy physician in Lake Forest, Ill., Proxmire graduated from Yale University and Harvard Business School. He served with military intelligence in World War II and later moved to Wisconsin to begin a career in politics.

Soon he carved out an independent streak on Capitol Hill by introducing amendments without consulting the party heads, filibustering, and even criticizing the dictates of then-Majority Leader Lyndon B. Johnson.

In that respect, he resembled to a certain degree the style of a latter-day maverick and government spending critic, Arizona Republican Sen. John McCain.

Proxmire remained dogged in his determination to represent his constituents as best he might. Despite his attacks against waste in the Pentagon and elsewhere in government, he remained tireless in his defense of milk price supports.

But he did vote in 1975 to kill the $50 million Kickapoo Dam in his own state, which he contended was a waste of taxpayers' money.

In more than two decades, Proxmire did not travel abroad on Senate business and he returned more than $900,000 from his office allowances to the Treasury.

He repeatedly sparked his colleagues' ire by staunchly opposing salary increases, fighting against such Senate `perks' as a new gym in the Hart office building and keeping the Senate open all night long — at a cost of thousands of dollars — so he alone could argue against increasing the national debt limit.

Even so, his reputation was that of a workaholic and even his strongest critics found him to be one the chamber's most disciplined, intelligent and persistent members.

He held the longest unbroken record in the history of the Senate for roll call votes.

Proxmire groomed his physical prowess as well as political. He kept in shape with rigorous exercise, ran several miles to work each day, and wrote a book about keeping fit. He even got a facelift and a hair transplant.

Although he was generally considered a liberal Democrat when he began his political career, Proxmire later said he found such labels useless.

He opposed abortion, school busing and was rated by the National Taxpayers Union consistently as the toughest foe of government waste. He was a staunch advocate for a balanced budget.

Even though he condemned Pentagon officials for cost-overruns on such things as the C5-A cargo plane, he was a supporter of a strong defense.

He has listed his greatest legislative victory as the forcing the halt to the SST supersonic jet airliner, despite opposition from the Nixon administration, the aircraft industry and several powerful senators.

As Proxmire increased in seniority, he became less of a budget nitpicker and more of an effective legislator. He served for six years as head of the Senate Banking Committee, where first opposed, and then backed, the federal bailout for New York City.

He also focused on consumer legislation, pushed a "truth in lending law" through Congress to protect borrowers and attempted to get the Federal Reserve System open to public scrutiny.