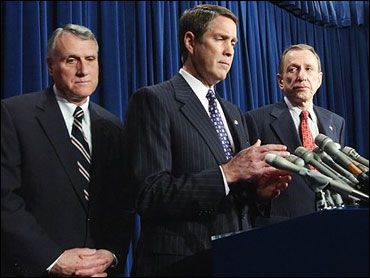 The Senate on Friday rejected attempts to reauthorize several provisions of the USA Patriot Act as infringing too much on Americans' privacy and liberty, dealing a huge defeat to the Bush administration and Republican leaders.

In a crucial vote Friday, Senate Majority Leader Bill Frist, R-Tenn., was not able to get the 60 votes needed to overcome a threatened filibuster by Sens. Russ Feingold, D-Wis., and Larry Craig, R-Idaho, and their allies. The final vote was 52-47.

President Bush, Attorney General Alberto Gonzales and Republicans congressional leaders had lobbied fiercely to make most of the expiring Patriot Act provisions permanent, and add new safeguards and expiration dates to the two most controversial parts: roving wiretaps and secret warrants for books, records and other items from businesses, hospitals and organizations such as libraries.

Feingold, Craig and other critics said that wasn't enough, and have called for the law to be extended in its present form so they can continue to try and add more civil liberties safeguards.

No one says they want all the Patriot Act provisions to expire December 31, reports CBS News correspondent Bob Fuss, but with President Bush refusing to accept a short-term renewal to allow more negotiations that now appears likely.

Frist changed his vote at the last moment after seeing the critics would win. He decided to vote with the prevailing side so he could call for a new vote at any time. He immediately objected to an offer of a short term extension from Democrats, saying the House won't approve it and the president won't sign it.

"We have more to fear from terrorism than we do from this Patriot Act," Frist warned.

If the Patriot Act provisions expire, Republicans say they will place the blame on Democrats in next year's midterm elections. "In the war on terror, we cannot afford to be without these vital tools for a single moment," White House press secretary Scott McClellan said. "The time for Democrats to stop standing in the way has come."

Critics of the Patriot Act could get a boost from a New York Times report that President Bush, following the Sept. 11 attacks, authorized the National Security Agency to spy on Americans without a court order.

According to The Times, the NSA monitored international phone calls and e-mails of thousands of Americans. Some NSA officials were reportedly so concerned about the legality of it all that they refused to participate, reports CBS News correspondent Bill Plante.

Previously, the NSA typically limited its domestic surveillance to foreign embassies and missions and obtained court orders for such investigations.

"I don't want to hear again from the attorney general or anyone on this floor that this government has shown it can be trusted to use the power we give it with restraint and care," said Feingold, the only senator to vote against the Patriot Act in 2001.

"It is time to have some checks and balances in this country," shouted Sen. Patrick Leahy, ranking Democrat on the Judiciary Committee. "We are more American for doing that."

Most of the Patriot Act — which expanded the government's surveillance and prosecutorial powers against suspected terrorists, their associates and financiers — was made permanent when Congress overwhelmingly passed it after the Sept. 11 attacks. Making the rest of it permanent was a priority for both the Bush administration and Republican leaders on Capitol Hill before Congress adjourns for the year.

The House on Wednesday passed a House-Senate compromise bill to renew the expiring portions of the Patriot Act that supporters say added significant safeguards to the law. Its Senate supporters say that compromise is the only thing that has a chance to pass Congress before 2006.

"This is a defining moment. There are no more compromises to be made, no more extensions of time. The bill is what it is," said Sen. Jon Kyl, R-Ariz.

The bill's opponents say the original act was rushed into law, and Congress should take more time now to make sure the rights of innocent Americans are safeguarded before making the expiring provisions permanent.

"Those that would give up essential liberties in pursuit of a little temporary security deserve neither liberty nor security," said Sen. John Sununu, R-N.H. They suggested a short extension so negotiations could continue, but the Senate scrapped a Democratic-led effort to renew the USA Patriot Act for just three months before the vote began.