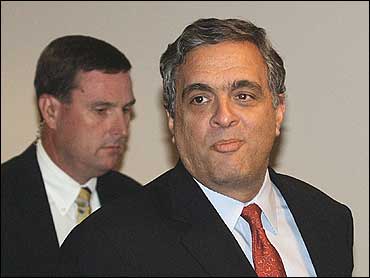 Senate Democrats insisted Wednesday that the White House was clearly responsible for including false information about Iraq's weapons program in President Bush's State of the Union speech.

Senators spoke after CIA Director Goerge Tenet made a 4½-hour closed-door appearance before the Senate Intelligence Committee. Tenet repeated his statement that he bears responsibility for allowing Bush to include his State of the Union speech a claim that Iraq had sought uranium from Africa for a nuclear weapons program.

But Sen. Richard Durbin, D-Ill., said the issue wasn't why Tenet failed to keep the information out of the speech but who was so determined to put it in and why.

"All roads still lead back to 1600 Pennsylvania Avenue," he said, referring to the White House address. "The question is, Who in the White House was so determined to put information in the State of the Union which had been discounted so dramatically by American intelligence sources?"

Durbin and other Democrats said Tenet had named White House officials who had sought to include the information in the speech, but the Democrats declined to identify them, citing the confidentiality of the proceedings.

CBS Chief White House Correspondent John Roberts reports that as the political controversy continues to swirl, the FBI has launched a preliminary investigation into the sourcing of the intelligence on the Iraq. One of the issues the bureau is looking into is the possible motives someone would have for misleading the White House.

Responding to a question, committee Chairman Pat Roberts, R-Kan., said White House officials could possibly be called before the panel to discuss the handling of the intelligence.

He described Tenet as "very contrite. He was very candid, very forthcoming. He accepted full responsibility." Tenet did not speak to reporters, except to describe his appearance as an "uplifting experience" as he left.

Roberts said it was clear "there were mistakes made up and down the chain." He said the hearing reaffirmed his belief that "the handling of this was sloppy."

Roberts also said he expected to hold open hearings on the Iraq intelligence, probably in September.

Both the Senate and House intelligence committees are holding inquiries on whether prewar intelligence was inaccurate or mishandled to help Bush make the case for war. Democrats have stepped up demands for a formal investigation after the White House acknowledged that the uranium claim was false.

That claim, supported by British intelligence but discounted by U.S. officials, was apparently based on a series of forged documents suggesting that Saddam Hussein sought uranium from the African nation of Niger.

Bush and his national security adviser, Condoleezza Rice, blamed Tenet for failing to seek removal of the statement from the speech. Tenet issued a statement accepting responsibility.

But Sen. Ron Wyden, D-Ore., said "the CIA in my judgment was not pushing to have this matter of Niger included in the State of the Union speech."

A senior law enforcement official said the FBI has opened an investigation into the documents. The focus is on who could benefit from putting false information into U.S. hands.

The official said the FBI is not investigating the U.S. government, but is looking at a variety of foreign entities, from other governments to anti-Saddam groups that favored a U.S. invasion.

The FBI sent a letter last week to Sen. Jay Rockefeller, D-W.Va., saying it had opened the inquiry. Rockefeller had called for such an investigation last spring. A spokeswoman for Rockefeller, Wendy Morigi, said the FBI investigation had actually begun a couple of months ago.

Sen. John Edwards, D-N.C., a presidential candidate and member of the Senate Intelligence Committee, said Bush should take responsibility for the reference to the Niger uranium.

Tenet's appearance had been planned before he took responsibility for the uranium information being included in Bush's speech, Roberts said. He had been scheduled to discuss information sharing with U.N. inspectors.

Before the hearing, Roberts also denounced the "partisan flavor" of the discussion.

"I think that's to be expected when you have that many presidential candidates," he said.