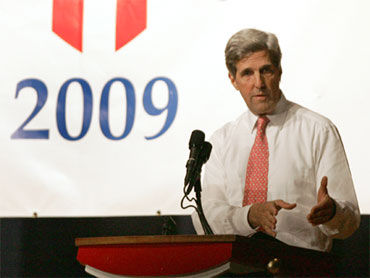 But it's just another name for cap and trade, a term derided by Republican critics as "cap and tax" because it will increase energy prices and which Democratic polls have shown faring poorly with voters.

The rebranding is an indication of the uphill battle the climate bill, which would cap greenhouse gases and also allow industries to buy emission allowances, faces in the Senate.

A number of Democratic senators, currently entangled in the heated health care debate, said they continued to have trouble with key elements of the climate legislation. Several said it would be a huge challenge, perhaps impossible, to try to get a climate bill passed this year.

The idea to remake cap and trade into pollution reduction and investment came from Sen. John Kerry, D-Mass., author of the bill unveiled Wednesday. He came up with it about a month ago to refocus attention on what the bill would do, not how it goes about doing it.

"Cap and trade doesn't mean anything to people," Kerry said in an interview, insisting that "this is an actual description of what's happening here."

At a news conference on the bill, cap and trade, the legislation's centerpiece, got nary a mention. Instead, the buzz words were "national security," "economic growth" and "jobs from clean energy development." Kerry and Sen. Barbara Boxer, D-Calif., the other key sponsor, entitled it The Clean Energy Jobs and American Power Act.

"We are here and we introduced this legislation because of one word, security," said Kerry. "It is time to reinvent the way Americans use energy."

The words "cap and trade," "global warming" and "climate" also didn't appear in a White House statement responding to the bill's introduction.

"With the draft legislation ... we are one step closer to putting America in control of our energy future and making America more energy independent," Obama said. "My administration is deeply committed to passing a bill that creates new American jobs and the clean energy incentives that foster innovation."

Cap and trade is still the centerpiece of the Senate bill, as it is in the House-passed version. Under cap and trade, emissions of heat-trapping gases from power plants, refineries and factories would face increasingly more stringent limits, or caps. Companies could then invest in pollution-reducing technologies, or buy and sell permits to meet the cap, the trade portion.

The bill calls for a 20 percent reduction in greenhouse gases by 2020, and an 80 percent cut by mid-century.

Environmentalists said Wednesday that all along they had been touting the energy security and jobs that would come from the bill.

"We don't even talk about it in terms of cap and trade," said Anna Aurilio, director of Environment America. "Cap and trade is a very confusing term and it is not accurate. What we are doing is reducing pollution."

Republican critics, who frequently have referred to the House-passed bill as "cap and tax" maintaining it would lead to soaring energy prices, weren't about to join in on the rhetorical shift.

Sen. James Inhofe, R-Okla., a strong critic of climate legislation, said Kerry and Boxer were making "an earnest attempt ... to refashion the obvious" but that they "produced yet another massive energy tax that will destroy jobs (and) raise electricity and gasoline prices."

Sen. Roger Wicker, R-Miss., called the Democratic bill a "cap and trade scheme" that "would suppress our economic recovery, cost jobs across our economy and result in higher prices on everything from energy to food for every single American."

The Environmental Protection Agency, meanwhile, put additional pressure on Congress to address climate change by announcing that for the first time it will regulate carbon dioxide releases from new power plants, factories and refineries or whenever they are significantly expanded. Supporters of the climate legislation have argued Congress should act to avoid less flexible action by the EPA.