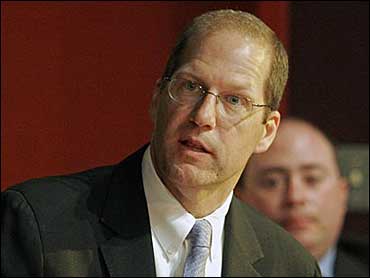 This column was written by John B. Judis.

The scandal surrounding Idaho Sen. Larry Craig and his arrest in a Minneapolis airport restroom will preoccupy politicians, ethicists, and bloggers for the next few weeks. But it probably won't alter Republican political prospects next year in deeply red Idaho.

As far as the 2008 election is concerned, the big political news this week was Virginia Representative Tom Davis' visit to southwest Virginia to test the waters for a possible Senate race for the seat now held by Republican Sen. John Warner. Why is that a big deal? Well, Davis is very close to Warner; he chaired his last Senate campaign; and he wouldn't be openly exploring a senate bid if he didn't think that Warner, 80, was going to retire. And if Warner retires, the overnight favorite to capture his seat won't be the Republican Davis, but a Democrat, former Governor Mark Warner.

With the news about Davis and, by extension, Warner, Democratic Senate prospects in November 2008 have gone from good to better. Here is a rundown of what they currently look like.

Overall, the Democrats will have an advantage in 2008 in having to defend far fewer seats than the Republicans. Only 12 seats held by Democrats will be up, compared to 22 for Republicans. And several of those Republicans were elected during the peculiar post-9/11 circumstances of the 2002 election, when President Bush used his immense popularity and the threat of a terrorist attack to boost the chances of several Republican underdogs.

If the Republicans have anything going for them, it is that 17 of those 22 seats are in states that Bush won in 2004. Most of these states - for instance, Alaska, Alabama, and Wyoming - are likely to support the Republican presidential candidate next year, which should help Republican candidates lower on the ballot. Still, Democrats are poised to pick up more seats than Republicans.

Democrats should be favored in Colorado, where Republican Sen. Wayne Allard is retiring. Colorado has recently been tilting Democratic. Democrats now control the governor's office and both houses of the state legislature, one of two Senate seats, and four of seven House seats. The Democratic candidate is expected to be Boulder Representative Mark Udall, an effective campaigner with an impressive political name. The National Republican Senate Committee tried to recruit former Representative Scott McInnis, a moderate, to run against Udall, but it looks like they are going to be stuck with a right-winger, former Representative Bob Schaffer, who has already shown himself to be ill at ease as a candidate.

Democrats should also be favored in New Hampshire, which, even more than Colorado, has moved into the Democratic column. Last November, Democrats won the governorship, both houses of the legislature, and ousted both Republican congressmen. If popular former Governor Jeanne Shaheen runs, she will be favored against incumbent Republican John Sununu. One New Hampshire poll last June showed only 31 percent of voters favoring Sununu's re-election.

Seats Democrats have a good chance to take:

Moderate Republican incumbents Norm Coleman in Minnesota, Susan Collins in Maine, and Gordon Smith in Oregon could be in trouble because they are running in states that are expected to vote strongly Democratic in 2008. If the Iraq war drags on and the Republicans are identified nationally with it, these candidates will have to run against their own party. Coleman and Smith are both unpopular in their states but face relatively inexperienced, although by no means incapable, foes. Collins remains popular in Maine, but she faces a popular Democratic congressman, Tom Allen. These races could hinge on voter disgust with the national Republicans and who runs the best campaigns.

If John Warner retires, and Mark Warner runs, Mark Warner would be the favorite to take his seat in Virginia. Equally, if Nebraska Sen. Chuck Hagel retires, and former senator Bob Kerrey runs, Kerrey would be favored to win this seat. Even if Kerrey doesn't run, Omaha Mayor Mike Fahey could defeat right-winger Jon Bruning, who is already running against Hagel. If Hagel runs and Bruning defeats him in the primary, a Democrat could also have a chance, particularly if Hagel refuses to back Bruning. Nebraska is often thought to be a Republican state - and it does vote Republican in presidential elections - but Nebraskans tend to elect Democrats (Exon, Nelson, Kerrey) as senators. As Don Walton of the Lincoln Journal Star has pointed out, "Hagel is the only Republican who has won a Senate race in Nebraska in the past 35 years." Hagel has been an exception.

Seats where Democrats have an outside chance:

In North Carolina, Republican Sen. Elizabeth Dole is vulnerable, but the Democrats have had difficult recruiting a formidable candidate to oppose her. Governor Mike Easley, who could have beaten her, refused. But they have found someone in Afghanistan war vet and two-term state legislator Grier Martin. In Texas, Republican incumbent John Cornyn is unpopular, and state Representative and Lt. Col. Rick Noriega could pose problems for him, but in a presidential year, it's still hard to believe that Texas will elect a Democratic senator. In Alaska, Sen. Ted Stevens is shrouded by scandal, but Democrats don't yet have a formidable challenger to him.

That still amounts to seven states where Democrats have a good or better chance of unseating Republicans. By contrast, Republicans currently have a good chance of unseating only one Democrat: Mary Landrieu of Louisiana. Administration incompetence after Katrina should have turned Louisiana into a Democratic bastion, but the hurricane had the ironic effect of making the state more Republican by driving black Democrats out of the state. Landrieu is likely to have a difficult opponent in State Treasurer John Kennedy, who recently switched parties. She barely won re-election in 2002.

The Republicans might have an outside chance in South Dakota (where ailing Tim Johnson is going to seek re-election) or in New Jersey (where 83-year-old Frank Lautenberg will be running and where Rudy Giuliani, if he gets the presidential nomination, would help the ticket), but they have failed to recruit top-tier candidates. As a result, it is very likely that Republicans will pick up no more than one seat, while Democrats may pick up as many as seven seats - and very likely, counting losses, somewhere between one and five. That will give them (counting Bernie Sanders and the apostate Joe Lieberman) at the very worst their existing 51-49 margin, but more likely somewhere between 53-47 and 59-41. That is not enough to withstand a filibuster on controversial labor law reform legislation, but probably enough - with a Democrat in the White House - to pass some version of national health insurance.

By John B. Judis
If you like this article, go to www.tnr.com, which breaks down today's top stories and offers nearly 100 years of news, opinion and analysis