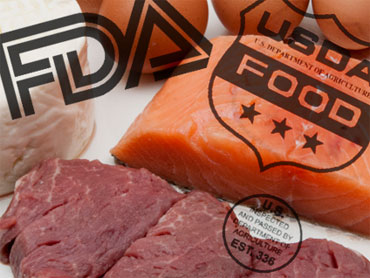 The Senate has voted to move forward on a far-reaching food safety bill that would give the Food and Drug Administration more power to prevent foodborne illnesses.

The Senate voted 74-25 to proceed with the bill. Supporters needed 60 votes because Sen. Tom Coburn, R-Okla., had objected, saying the legislation's $1.4 billion cost isn't paid for.

The bill would give the FDA more authority to recall tainted products, increase inspections of food processors and require producers to follow stricter standards for keeping food safe in the wake of outbreaks of contaminated peanuts, eggs and produce that have sickened hundreds.

Also on Wednesday, the Senate blocked a measure designed to reduce wage disparities between men and women. The 58-41 vote to take up the Paycheck Fairness Act fell short of the 60 needed to overcome GOP opposition.

Civil rights groups, labor leaders and the Obama administration all supported the bill, which would make employers prove that any disparities in wages are job-related and not sex-based. Republicans and business groups said the bill would expose employers to more litigation by removing limits on punitive and compensatory damage awards.

Whether the food safety bill could make it to the president's desk during the brief lame-duck congressional session is unclear since the House passed a different version of the legislation in 2009. Even if the Senate passes the bill, the two pieces of legislation would have to be quickly reconciled before the end of this session sometime after Thanksgiving.

Supporters are still negotiating with two senators expected to offer amendments to the bill - Sen. Jon Tester, D. Mont., who is concerned the legislation will be burdensome on small farms, and Sen. Dianne Feinstein, D-Calif., who plans to offer an amendment to limit the use of the plastics chemical bisphenol-A.

Tester's amendment, which would exempt some smaller farms from the bill's requirements, has gained support among grassroots advocates for buying food produced locally. While the bill is designed to give the Food and Drug Administration greater authority over the nation's food supply, supporters of the Tester amendment say it could bankrupt some small farms that don't have the means to comply with new standards the bill would impose.

Those standards could include registering food safety plans with the FDA and documenting efforts to show food is not contaminated as it is produced.

Food safety advocates have objected to some of the exemptions, saying Tester's concerns are overblown and the size of the farm is not as important as the safety of the food.

Feinstein's amendment would ban BPA, a chemical used to harden plastics in some food containers and hundreds of other household items, from some products. Some scientists and activists who oppose the use of the chemical have said it can interfere with development and possibly cause cancer.

Feinstein has insisted on offering the amendment to the bill, and negotiations on the issue have been ongoing for months. She issued a statement Wednesday saying the faces opposition from industry.

"We are still trying to work out details of an agreement, but chemical industry lobbyists are doing everything in their power to block any progress on the issue," Feinstein said.

Recent outbreaks have exposed a lack of resources and authority at the FDA as the embattled agency has struggled to contain and trace contaminated products.

Currently, the FDA does not have the authority to order a recall and must negotiate recalls with the affected producers. The agency rarely inspects many food facilities and farms, visiting some every decade or so and others not at all.