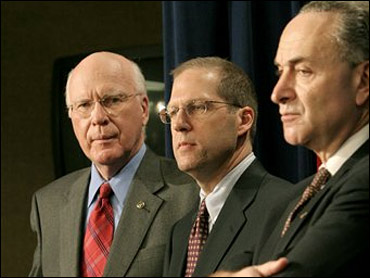 The USA Patriot Act, the country's top anti-terror law, may have a new lease on life.

The Republican-controlled Senate on Wednesday approved a six-month extension of the law to keep it from expiring on Dec. 31.

After repeatedly opposing any short term extension of the Patriot Act, President Bush now says he'll go for it, reports CBS News White House correspondent Peter Maer. In a late night written statement following the senate action, Mr. Bush framed the extension as a rejection of what he described as moves to block the Patriot Act to score political points.

The Republican-controlled House is now expected to come back and consider the legislation keeping the 16 provisions of the law passed after the terrorist attacks on New York City and Washington from expiring.

House and Senate negotiators had agreed to compromise legislation that would have made most of the anti-terrorism law permanent and added additional safeguards to the law. But Senate Democrats and a small group of Republican senators blocked the legislation in a filibuster — a procedural move to indefinitely delay a vote — arguing that the compromise needed more safeguards in it to protect Americans' civil liberties.

Republican Senate Majority Leader Bill Frist said he had no choice but to accept a six-month extension in the face of a successful filibuster and the Patriot Act's Dec. 31 expiration date. "I'm not going to let the Patriot Act die," Frist said.

"This will allow more time to finally agree on a bill that protects our rights and freedoms while preserving important tools for fighting terrorism," said Democratic Sen. Russ Feingold, who was the only senator to vote against the original Patriot Act in 2001.

"The work of Congress on the Patriot Act is not finished," President Bush said in the statement. "The act will expire next summer, but the terrorist threat to America will not expire on that schedule. I look forward to continuing to work with Congress to reauthorize the Patriot Act."

"I think the Senate Majority Leader, Bill Frist, would not have cut a deal like this without talking to the White House," says CBS News correspondent Gloria Borger. "House Republicans, however, can be a little bit more ornery. Some people were saying late last night the indications were they would accept it as well but unhappily."

Frist said he had not consulted with House Speaker Dennis Hastert, a Republican, yet on the six-month extension. Senior Republicans there have opposed any temporary extension of the current law, insisting that most of the expiring provisions should be renewed permanently, but it would be difficult for the House to reject a plan agreed to by the Senate and Bush.

Republicans who had pushed for legislation that would make most of the expiring provisions permanent said the agreement only postpones the ongoing arguments over the Patriot Act for six months. "We'll be right back where we are right now," said a clearly frustrated Republican Sen. Orrin Hatch.

If Congress fails to renew 16 expiring provisions of the USA Patriot Act by Dec. 31, America will be less safe, Homeland Security Secretary Michael Chertoff warned. Chertoff said every morning he reviews threat information against the United States and lies awake at night worrying about "what's coming next."

"The threat is still very much alive," Chertoff said, referring to terror groups that want to strike the United States.