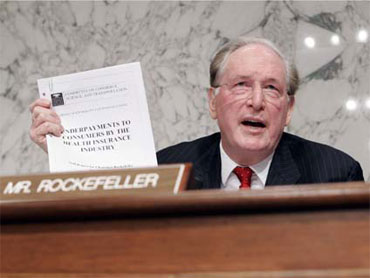 A key Senate panel shot down two amendments on Tuesday afternoon to add a government-run health insurance plan to its health care bill.

Getting to the crux of the nation's current health care debate – whether there should be more government involvement in health care -- the Senate Finance Committee spent hours debating the merits of a government plan, or "public option," before voting down two separate proposals.

First, Sen. Jay Rockefeller (D-W.V.) proposed an amendment to add a public option to the health care bill introduced by Sen. Max Baucus (D-Mont.) in the committee. The committee rejected the amendment by a vote of 15 to eight.

Directly following that vote, the committee voted on a second, weaker public option amendment from Sen. Chuck Schumer (D-N.Y.). The committee rejected that amendment by a vote of 13 to 10, with three Democrats voting against it -- Conrad, Lincoln and Baucus.

Baucus said he voted against the amendments because he does not believe a health care bill with a public option could get the 60 votes necessary to pass in the full Senate.

"I see a lot to like in a public option," he said, "but my first job is to get this bill across the finish line."

He added, "It's also important to remind ourselves Rome wasn't built in a day."

Rockefeller said a public option would protect consumers from profit-hungry insurance companies and save the government $50 billion over 10 years. Republicans, on the other hand, said it would lead America on a path to a single-payer health care system -- one in which the government would be solely responsible for health care costs.

By voting down the amendment, Rockefeller said, "What we're saying is, 'Go ahead health insurance companies, and make more profits.'"

"And we're saying people and their problems... that they somehow don't count as much," he added. "People come second, and profits come first if we're against this, in my judgment."

Baucus' health care bill, crafted to gain as much bipartisan support as possible, does not include a public option because of opposition to the plan from Republicans and some moderate Democrats.

Rockefeller's amendment was considered the more liberal of the two public option amendments because it would have aligned medical provider payments with Medicare payment rates for two years -- essentially securing lower payment rates than the private industry pays. Some moderate Democrats said that worried them.

"With Sen. Rockefeller's amendment, the devil is in the details," Conrad said. North Dakota has the second-lowest level of Medicare reimbursement in the country, he said, meaning that "every major hospital in my state goes broke" if public option payment rates are tied to Medicare.

Schumer's amendment would not have tied payment rates to Medicare, nor would it have required medical providers to participate in the new plan.

"Frankly, I might prefer Sen. Rockefeller's [amendment], but like Sen. Baucus, I too am a realist," Schumer said.

The senator said weaker public option can win 60 votes in the Senate. He added, however, that "This is far more than a symbol. This is not an ideological fight. It is vital to make this bill, which is a good bill, a better bill."

More than half of the cost of Baucus' bill -- nearly half a trillion dollars -- Rockefeller pointed out, would go toward providing subsidies for consumers to buy private insurance. The bill asks little in return from insurers for that money, he said. Insurance companies will continue to raise premiums without a public option to keep them in check, he said.

Meanwhile, Sen. Chuck Grassley (R-Iowa), the leading Republican in the committee, said a public option would be "a slow walk toward government-controlled single payer health care." Other Republicans voiced the same concern.

To highlight the flaws of government-administered health insurance, Republicans also criticized Medicare -- straying from their recent praise for the government program that insures senior citizens.

Medicare is "on a path to a fiscal meltdown" and underpays doctors and health care providers, Sen. Orrin Hatch (R-Utah) said. It is "forcing increasing numbers of providers to simply stop seeing our nation's seniors," he said, and shifts costs to taxpayers.

Grassley called Medicare "part of the social fabric of America," but both he and Grassley said its integral part of American culture prove how hard it would be to reverse any cultivation of a new government plan.