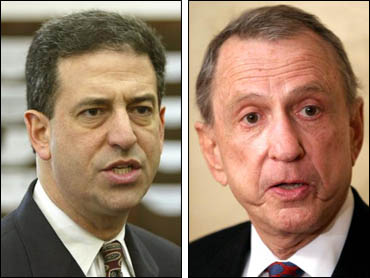 "The president has, I think, made up a law that we never passed," said Sen. Russell Feingold, D-Wis.

"They talk about constitutional authority," Specter said. "There are limits as to what the president can do."

Senate Democratic Leader Harry Reid of Nevada also called for an investigation, and House Democratic leaders asked Speaker Dennis Hastert to create a bipartisan panel to do the same.

President Bush acknowledged Saturday that since October 2001 he has authorized the National Security Agency to eavesdrop on international phone calls and e-mails of people within the United States without seeking warrants from courts.

The New York Times disclosed the existence of the program last week. Bush and other administration officials initially refused to discuss the surveillance or their legal authority, citing security concerns.

CBS News correspondent Bill Plante reports Mr. Bush lashed out at news organizations for making the story public. Mr. Bush said the report relied on unauthorized disclosure of classified information that "damages our national security and puts our citizens at risk." Disclosure of the program helped generate opposition to a renewal of the Patriot Act in the Senate on Friday.

"The activities I have authorized make it more likely that killers like these 9/11 hijackers will be identified and located in time," Mr. Bush said in a rare live address. "And the activities conducted under this authorization have helped detect and prevent possible terrorist attacks in the United States and abroad."

President Bush took personal responsibility for the war in Iraq Sunday evening, speaking from the Oval Office, where in March 2003, he announced the U.S.-led invasion. Nearly three years later, more than 2,150 U.S. soldiers have died, Bush's popularity has plummeted and about half of Americans think the war was a mistake. Yet a strong majority opposes an immediate withdrawal of U.S. forces.

The address came on the heels of four major speeches in which President Bush acknowledged setbacks and surprises in the war and took responsibility for ordering the invasion on the basis of inaccurate intelligence. The admissions were part of a White House effort to address complaints that Mr. Bush lacked a solid strategy for the war and has been oblivious to the violence that Americans plainly see on television.

"I know that some of my decisions have led to terrible loss and not one of those decisions has been taken lightly," he said. "I know that this war is controversial, yet being your president requires doing what I believe is right and accepting the consequences."

"It's been briefed to the Congress over a dozen times, and, in fact, it is a program that is, by every effort we've been able to make, consistent with the statutes and with the law," Vice President Dick Cheney said Sunday in a televised interview to be broadcast Monday evening: "It's the kind of capability if we'd had before 9/11 might have led us to be able to prevent 9/11."

President Bush and other administration officials also have said congressional leaders were briefed regularly on the program. Sen. John McCain, R-Ariz., said there were no objections raised by lawmakers who were told about it.

"That's a legitimate part of the equation," McCain said. But he said President Bush still needs to explain why he chose to ignore the law that requires approval of a special court for domestic wiretaps.

Reid acknowledged he had been briefed on the four-year-old domestic spy program "a couple months ago" but insisted the administration bears full responsibility. Reid became Democratic leader in January.

House Minority Leader Nancy Pelosi, D-Calif., said in a statement Saturday that she had been told on several occasions about unspecified activities by the NSA. Pelosi said she expressed strong concerns at the time.

Secretary of State Condoleezza Rice said on "Fox News Sunday" that Mr. Bush "has gone to great lengths to make certain that he is both living under his obligations to protect Americans from another attack but also to protect their civil liberties."

Several lawmakers weren't so sure. They pointed to a 1978 federal law, the Foreign Intelligence Surveillance Act, which provides for domestic surveillance under extreme situations, but only with court approval.

Specter said he wants Mr. Bush's advisers to cite their specific legal authority for bypassing the courts. President Bush said the attorney general and White House counsel's office had affirmed the legality of his actions.

Appearing with Specter on CNN's "Late Edition," Feingold said Mr. Bush is accountable for the program regardless of whether congressional leaders were notified.

"It doesn't matter if you tell everybody in the whole country if it's against the law," said Feingold, a member of the Judiciary Committee.

Mr. Bush said the program was narrowly designed and used in a manner "consistent with U.S. law and the Constitution." He said it targets only international communications of people inside the U.S. with "a clear link" to al Qaeda or related terrorist organizations.

Government officials have refused to define the standards they're using to establish such a link or to say how many people are being monitored.

Sen. Lindsey Graham, R-S.C., called that troubling. If Bush is allowed to decide unilaterally who the potential terrorists are, he in essence becomes the court, Graham said on CBS's "Face the Nation."

"We are at war, and I applaud the president for being aggressive," said Graham, who also called for a congressional review. "But we cannot set aside the rule of law in a time of war."

The existence of the NSA program surfaced as Mr. Bush was fighting to save the expiring provisions of the Patriot Act, the domestic anti-terrorism law enacted after the Sept. 11 attacks.

Renewal of the law has stalled over some its most contentious provisions, including powers granted law enforcement to gain secret access to library and medical records and other personal data during investigations of suspected terrorist activity.

Democrats have urged Mr. Bush to support a brief extension of the law so that changes could be made in the reauthorization, but Bush has refused, saying he wants renewal now.