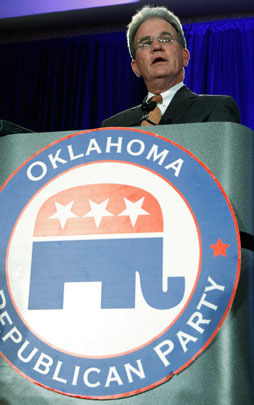 In a Tuesday morning vote, the Senate defeated a GOP-sponsored bill that would have placed a two-year ban on Congressional earmarks.

The proposal, sponsored by Oklahoma Republican Tom Coburn, was voted down in a 39-56 vote. All but seven Democrats voted against the bill, and all but eight Republicans voting for it. Because of the way the proposal was brought to the floor, 67 votes would have been needed for passage.

The moratorium was attached to a food safety bill that passed through the Senate later in the morning. It would essentially have prohibited lawmakers from taking up legislation containing earmarks or inserting earmarks into legislation themselves. Earmarks are requests by lawmakers for funds to be directed to their districts for specific companies or projects.

Despite the proposal's failure on Tuesday, earmark defenders may face a tough fight in the new year, when a number of Republicans who oppose the policy join the new Congress.

Senate and House Republicans have already adopted a voluntary earmarks banfor the new Congress. Just three days after passage, however, Arizona Republican Sen. John Kyl inserted into a bill a $200 million appropriation that many consider an earmark.

Republicans in the House and the Senate adopted a similar earmark ban in March; by April, several GOP House members had already violated it.

Some lawmakers, including Senate Republican leader Mitch McConnell, have expressed concerns that banning earmarks gives the White House too much control over federal spending, since earmarking allows members of Congress to circumvent the executive branch bidding process for federal outlays. McConnell reversed himself and endorsed the voluntary ban earlier this month, however, calling it a "small but important symbolic step we can take to show that we're serious, another step on the way to serious and sustained cuts in spending and to the debt."

Earmarks account for less than one half of one percent of the federal budget, money that even under a ban would likely be spent. McConnell had previously said such a ban "doesn't save any money."

Some legislators say a ban is a mistake because earmarks, when used effectively, are an efficient means to bring needed funds to their constituents.

"I believe I have an important responsibility to the state of Illinois and the people I represent to direct federal dollars into projects critically important for our state and its future,'' Illinois Senator Dick Durbin told reporters, according to the Associated Press, adding that the earmark process has been drastically improved in recent years.

"We have put in place the most dramatic reform of this appropriations process since I've served in Congress," Durbin continued. "There is full disclosure in my office of every single request for an appropriation. We then ask those who have made the requests to have a full disclaimer of their involvement in the appropriation, so it's there for the public record. This kind of transparency is virtually unprecedented."

President Obama has said in the past that he believes earmarks can be useful if utilized efficiently, but he recently said he supports a permanent ban on all earmarks.