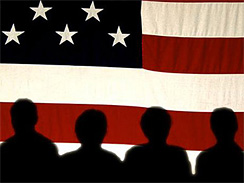 (AP)
Senators working on health care legislation are giving a fresh look at ways to make sure that only U.S. citizens benefit from an overhaul of the nation's health care system, after an outburst during President Obama's address to Congress put new focus on the issue.

After President Obama on Wednesday said his proposed health care reforms would not apply to illegal immigrants, Rep. Joe Wilson (R-S.C.) shouted out, "You lie!"

To ensure that new programs or benefits created through health care reform do not apply to illegal residents, Sen. Max Baucus and his bipartisan "gang of six" legislators from the Senate Finance Committee are reportedly considering adding a citizen verification component to their health care bill, which should be unveiled next week.

"We spent some time talking about how one proves one's status to be eligible ... to prove that you're a citizen," Baucus told Roll Call newspaper on Thursday. "Illegal residents are clearly excluded."

The committee met Friday morning to discuss the framework for reform that Baucus laid out this week and ways to improve it.

Baucus' framework explicitly states that "No illegal immigrants will benefit from the health care tax credits."

The legislation produced by the House of Representatives also expressly prohibits illegal residents from getting tax credits. As CBSNews.com's Declan McCullagh reports, however, the House bill does not restrict illegal residents from purchasing health care off the proposed health insurance exchange -- a marketplace of both public and private plans. Some illegal immigrants already obtain private insurance now, through their employers or individual plans.

In the House bill, illegal immigrants would also be subject to fines if they did not purchase health care, according to the nonpartisan Congressional Research Service.

Democrats have been reluctant to expand citizenship verification programs to more government-funded health care programs because studies have shown that such requirements for Medicaid have increased administrative costs for states and have made it difficult for some Americans to join the program, the New York Times reports.

In the case of six states where the program was reviewed by a congressional committee, the Times reports, verification increased federal costs by $8.3 million but only detected eight illegal immigrants using Medicaid.

The Washington Post points out today that taxpayers already subsidize health care for illegal immigrants through Medicaid since the program reimburses hospitals for emergency treatments.

Democrats' health care proposals include an expansion of Medicaid.

Though Mr. Obama on Wednesday insisted his proposals would not apply to illegal immigrants, he told CBS News' Katie Couric in July that there may need to be an exception for children.

"The one exception that I think has to be discussed is how are we treating children," he said. "Partly because if you've got children who may be here illegally but are still in playgrounds or at schools, and potentially are passing on illnesses and communicable diseases, that aren't getting vaccinated, that I think is a situation where you may have to make an exception."