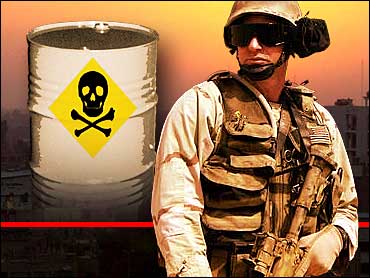 The Bush administration and the U.S. intelligence community have had some success in finding Saddam Hussein's weapons of mass destruction, the chairman of the Senate Intelligence Committee said Thursday.

Sen. Pat Roberts told reporters on a telephone conference call that he couldn't go into detail because the news is classified.

"It's going to take some time to uncover Saddam Hussein's weapons programs, and let me emphasize the term 'programs,'" Roberts said. "This was a program designed to be hidden, hidden by people who knew what their fate would be if they revealed it."

Roberts traveled this week to Iraq and the Middle East with members of the Senate Armed Services Committee.

Armed Services Chairman John Warner, a Virginia Republican, said the delegation received information "of the highest classification" from which "any fair-minded, objective individual…will clearly come to the conclusion that these weapons did exist, that they were in the hands of those who could use them, and thank God they weren't used," he said.

But the panel's top Democrat, Sen. Carl Levin of Michigan said the information was "cautiously presented and with the urging that there not be a conclusion drawn."

He described it as evidence "relative to a program that could have been constituted or reconstituted with some speed."

In nearly three months since the fall of Baghdad, no weapons of mass destruction have been found.

Critics have accused the administration of exaggerating or mishandling intelligence to convince Americans and the world that it was necessary to invade Iraq.

When Congress returns from its Fourth of July holiday recess next week, Roberts will continue Intelligence Committee hearings into prewar intelligence on Iraq's weapons program and whether the Bush administration manipulated the information.

As the search for weapons has gone on, the administration has qualified its prewar claims somewhat — suggesting weapons weren't the chief reason for war, claiming Iraq had weapons "programs" rather than weapons themselves, and hinting that Iraq may have destroyed the weapons.

Presidential spokesman Ari Fleischer Wednesday put a new twist on the weapons issue, saying those thought there were no weapons had to explain their absence.

In addition to three Congressional inquiries, the CIA and other agencies are conducting an internal review.

The head of that review said American intelligence agencies sometimes lacked solid information on Iraq's alleged weapons programs and faced pressure from the Bush administration. But they did not skew their prewar assessments of Iraq's stockpiles.

Richard Kerr, a retired CIA analyst and official heading the review, said the foundation of the U.S. information on Iraq's weapons programs was discoveries after the 1991 Gulf War, Kerr said.

But after U.N. weapons inspectors left Iraq in 1998, much of the information dried up, leaving the U.S. government to discover what it could from satellite images, intercepted communications and spies and refugees.

Still, Kerr said, "it would have been very hard for an intelligence analyst to determine that there were no weapons of mass destruction programs. There was a lot of information over time."

"While there was an awful lot of pressure to try to support various positions, that's always the case," Kerr said. But a review of the prewar findings shows the analysts didn't change their position, Kerr said.

The analysts cataloged some uncertainties about the data in intelligence reports but still generally concluded Iraq had active weapons of mass destruction programs, Kerr said.

In comments Wednesday, President Bush defended the basis for war. "Saddam Hussein had a weapons program," Mr. Bush said. "Remember he used them — he used chemical weapons on his own people," referring to allegations that Saddam used nerve gas against the Kurds 15 years ago.

Mr. Bush made no mention of the failure of U.S. teams to find evidence of weapons of mass destruction, and did not promise that weapons will be found, saying only, "It's just a matter of time, a matter of time."

Questions over the accuracy of prewar intelligence and the way it was used are being asked in Britain as well, where the leader of the opposition Conservative Party on Thursday questioned the credibility of a parliamentary committee which is preparing a report on the government's use of intelligence on Iraqi weapons.

Tory leader Iain Duncan Smith said the House of Commons Foreign Affairs Committee's authority was in doubt after one of its members said he was already satisfied Prime Minister Tony Blair's communications director had not tampered with an intelligence dossier on Iraqi arms.

The Foreign Affairs Committee is, in part, investigating a BBC report that Blair spokesman Alastair Campbell redrafted a dossier published in September last year to include claims that Saddam could launch chemical and biological weapons at 45 minutes' notice.

Committee member Eric Illsley, a lawmaker from Blair's ruling Labor Party, said last Sunday he was satisfied the dossier and the 45-minute detail were compiled by intelligence chiefs, not by Campbell.

However, Conservative committee member John Maples said his colleague's remarks were premature. The body's report is expected on Monday.

Duncan Smith, who backed Blair's Iraq policy during the war, said it was important that the cross-party Foreign Affairs Committee reach a unanimous verdict. He repeated a call for an independent judicial inquiry into the government's handling of intelligence on Iraqi arms.