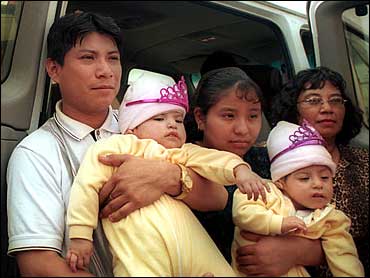 Maria de Teresa Quiej, the conjoined twin who suffered from a brain infection months after she was separated from her twin sister, is responding well to antibiotics and is expected to recover, a medical source said Monday.

The girl, born fused at the skull and separated by U.S. doctors, was rushed to a Guatemala City hospital April 15, after doctors discovered that a valve inserted in her skull to keep fluid from accumulating had become infected with E. Coli bacteria.

The infection was judged to be life-threatening.

"The doctors are surprised at how strong that little girl is," said Debora Kress of the Guatemalan Pediatric Foundation, one of the groups that providing care and support for the girls' family.

"She is recovering," Kress said. "She is responding to the treatment, but she is still in severe condition" and will probably have to remain hospitalized for two or three more weeks.

Maria Teresa and her sister Maria de Jesus captured the world's attention when a team of U.S. doctors separated the pair in a 23-hour operation at Mattel Children's Hospital in Los Angeles on Aug. 6.

The twins, now 21 months old, returned to Guatemala City on Jan. 13 and have lived in a house built for them by the pediatric foundation.

But doctors discovered the problem with the valve, removed it and inserted a new device to drain fluid that could otherwise build up and put enough pressure on her brain to kill her.

Maria de Jesus had been hospitalized in March for a skin infection in the scar left on her head from the separation surgery.