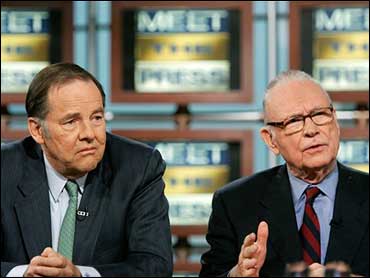 The U.S. is at great risk for more terrorist attacks because Congress and the White House have failed to enact several strong security measures, members of the former Sept. 11 commission said Sunday.

"It's not a priority for the government right now," said the former chairman, Thomas Kean, ahead of the group's release of a report Monday assessing how well its recommendations have been followed.

"More than four years after 9/11 ... people are not paying attention," the former Republican governor of New Jersey said. "God help us if we have another attack."

Added Lee Hamilton, the former Democratic vice chairman of the commission: "We believe that another attack will occur. It's not a question of if. We are not as well-prepared as we should be."

The five Republicans and five Democrats on the commission, whose recommendations are now promoted through a privately funded group known as the 9/11 Public Discourse Project, conclude that the government deserves "more Fs than As" in responding to their 41 suggested changes.

Since the commission's final report in July 2004, the government has enacted the centerpiece proposal to create a national intelligence director. But the government has stalled on other ideas, including improving communication among emergency responders and shifting federal terrorism-fighting money so it goes to states based on risk level.

"There is a lack of a sense of urgency," Hamilton said. "There are so many competing priorities. We've got three wars going on: one in Afghanistan, one in Iraq and the war against terror. And it's awfully hard to keep people focused on something like this."

National security adviser Stephen Hadley said Sunday that President Bush is committed to putting in place most of the commission's recommendations.

"Obviously, as we've said all along, we are safer, but not yet safe. There is more to do," Hadley said on "Fox News Sunday."

Ex-commissioners contended the government has been remiss by failing to act more quickly.

Kean said the Transportation Security Administration was wrong to announce changes last week that will allow airline passengers to carry small scissors and some sharp tools. He also said the agency, by now, should have consolidated databases of passenger information into a single "terror watch list" to aid screening.

"I don't think we have to go backward here," said Kean, who appeared with Hamilton on NBC's "Meet the Press."

"They're talking about using more money for random checks. Terrorists coming through the airport may still not be spotted," Kean said.

Kean and Hamilton urged Congress to pass spending bills that would allow police and fire to communicate across radio spectrums and to reallocate money so that Washington and New York, which have more people and symbolic landmarks, could receive more for terrorism defense.

Both bills have stalled in Congress, in part over the level of spending and turf fights over which states should get the most dollars.

"This is a no-brainer," said Hamilton, a former Indiana congressman.

As for the dollar dispute, Hamilton said, "We know what terrorists want to do: they want to kill as many Americans as possible. That means you protect the Washington monument and United States Capitol, and not other places."

Congress established the commission in 2002 to investigate government missteps that led to the attacks of Sept. 11, 2001. Its 567-page final report, which became a national best seller, does not blame Bush or former President Clinton for missteps contributing to the attacks but did say they failed to make anti-terrorism a higher priority.

The commission also concluded that the Sept. 11 attack would not be the nation's last, noting that al Qaeda had tried for at least 10 years to acquire weapons of mass destruction.

Calling the country "less safe than we were 18 months ago," former Democratic commissioner Jamie Gorelick said Sunday the government's failure to move forward on the recommendations makes the U.S. more vulnerable.

She cited the failure to ensure that foreign nations are upgrading security measures to stop proliferation of nuclear, biological and chemical materials, as well as the FBI's resistance to overhauling its anti-terror programs.

"You remember the sense of urgency that we all felt in the summer of 2004. The interest has faded," the Washington lawyer said on ABC's "Good Morning America." "You could see that in the aftermath of Katrina. We assumed that our government would be able to do what it needed to do and it didn't do it."