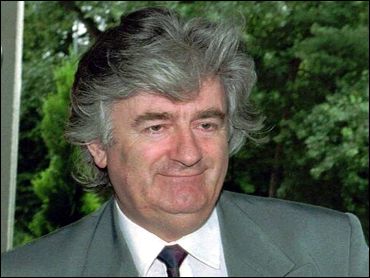 "We searched two premises this morning, including the house of Radovan Karadzic, but found no evidence that he was there," Lt. Matthew Brock, a spokesman for the peacekeeping force in Bosnia, told The Associated Press.

Brock declined to say whether the search turned up any useful information but said troops confiscated an undisclosed amount of weapons and ammunition.

The action was part of a search of the Bosnian Serb stronghold of Pale, about 10 miles east of Sarajevo, as peacekeepers hunted for Karadzic and former Bosnian Serb military leader Ratko Mladic, Brock said. Mladic, along with Karadzic, are the top two fugitives sought for trial by the U.N. war crimes tribunal in The Hague, Netherlands.

The Pale search began early Saturday after the peacekeeping force received a tip that Karadzic was there.

Karadzic's wife, Ljiljana, was present and "cooperative and accompanied the soldiers while in the house," Brock added, saying that the troops also looked for documentation that could lead them to Karadzic's whereabouts.

Peacekeepers detained a person outside a hotel who may be linked to Karadzic, Brock said. He declined to identify the individual but several witness identified the detainee as Bata Tesic, a Karadzic supporter and former member of Bosnian Serb special police.

Asked about the importance of the capture, Capt. David Sullivan, a NATO spokesman said "all detainments are key in the hunt for this individual and his known supporters."

A Pale police official speaking on condition of anonymity said local businessman Dragan Kremenovic also was detained by peacekeepers for questioning Sunday. The official would not give more details. Brock confirmed that a second person was detained but declined to elaborate.

About 80 peacekeepers in 30 vehicles along with local police were deployed throughout Pale on Sunday. Troops acting on a tip that Karadzic might have been injured before the raid searched all medical facilities in Pale, set up checkpoints and searched vehicles. The checkpoints were expected to remain until Monday.

The troops also searched the Orthodox church in Pale during the night.

Karadzic, the Bosnian Serb wartime leader, and Mladic, his military commander, have been indicted for genocide and war crimes, including the 1995 slaughter of up to 8,000 Muslim men and boys at Srebrenica.

Pale was the seat of the Bosnian Serb government during the 1992-95 war, which pitted Bosnia's Muslims, Croats and Serbs against each other, killing about 260,000.

Since the end of the war, peacekeepers have conducted several searches in Pale for the two top suspects, believed to be hiding in eastern Bosnia and in neighboring Serbia-Montenegro.