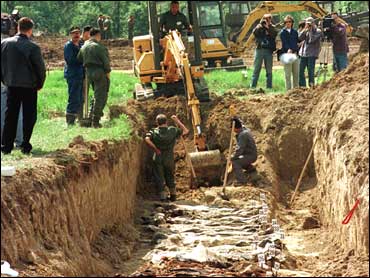 A U.N. tribunal sentenced a Serb army officer Thursday to 20 years imprisonment for aiding and abetting the murder of 194 people sheltering in the hospital in the Croatian town of Vukovar in 1991, and sent a second officer to prison for five years for standing by while prisoners were tortured.

A third Serb officer was acquitted of all charges related to the Vukovar incident, one of the earliest and most notorious cases of mass murder in the 1991-95 Balkan wars that tore Yugoslavia apart.

Mile Mrksic, 60, then a colonel in the Serb army and the commander of the Serb forces in the region, received a 20-year sentence for withdrawing protection of Croatians and other non-Serbs evacuated from the hospital, unleashing the local Serb paramilitary forces who killed them.

Veselin Sljivancanin, 54, the area's chief security officer, was sentenced to five years for failing to protect the Croatians, who were considered prisoners of war, from beatings and torture by the local Serb paramilitary forces and Territorial Defense units.

Miroslav Radic, 45, the third of the group known as the "Vukovar Three," was found to have had nothing to do with the cruelty meted out to the hospital evacuees, and ultimately their murder.

Prosecutors had demanded life imprisonment; the decision by the three judges was likely to be a crushing disappointment in Croatia.

The hospital in the eastern Croatian town fell to the Serb army in November 1991 after a three-month siege that virtually leveled the town. The hospital was among the last places to be captured, and was packed with patients, hospital staff and civilians who had taken refuge in its corridors.

The evacuation of the hospital earned particular notoriety after the Serbs failed to live up to an agreement with the Red Cross and other international observers to monitor the surrender. When the agreed hour approached, an armored Serb vehicle blocked the observers' access across a bridge to the hospital while buses took another route to smuggle out the men seized inside the building.

More than 200 men were taken first to a Serb army barracks, then to a pig farm at Ovcara where they passed through a gauntlet of soldiers who "beat them with wooden sticks, rifle butts poles chains and even crutches," said the judgment. Their guards formed "shifts of beaters" in an unrelenting night of torture.

That night, Nov. 20, Mrksic ordered the Serb army and military police to withdraw. The paramilitary forces took the men in small groups to an area nearby and shot them.

Though charged with the murders of 264 people, the court convicted Mrksic of aiding and abetting the murders of the lesser number - the number of bodies dug up and identified from the mass grave on the site of the massacre.