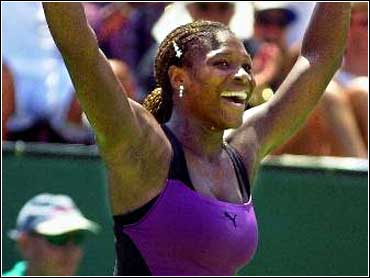 Following her victory here last August, Williams went on to win the U.S. Open her only Grand Slam triumph.

Davenport, ranked second in the world, served for the match at 6-5 in the third set, but Williams broke at love to force a tiebreaker.

It was 1-1 when Davenport double faulted, and Williams then won the next five points, ending the 2-hour, 28-minute match by winning 11 of the final 12 points to extend her career record against Davenport to 5-1.

"Lindsay was hitting winners left and right," Williams said. "I had that never-say-die spirit and just kept fighting and fighting. I don't give up, I tried to go for my shots and it just worked. I'm going to fight until the end."

The tournament at the Manhattan Club was the first for the 18-year-old Serena since Wimbledon, where she lost to older sister Venus in the semifinals.

Seeded fifth in this tournament and ranked seventh in the world mainly because she hasn't played much this year, Serena Williams rallied for a 4-6, 6-2, 6-3 victory over Martina Hingis, the world's top-ranked player and No. 1 seed, in Saturday's semifinals.

"I can't remember a match where I had so many chances and it didn't go my way," the 24-year-old Davenport said. "So many times I was up and it seemed like my serve left me."

Davenport committed 13 double faults, which she called "an extraordinarily high number for me," and had nine aces.

Davenport broke Williams in the first, fifth and 11th games of the third set, but Williams broke in the fourth, sixth and 12th games.

"Even at 6-5 (in the third set), she came up with some great shots," Davenport said. "I got stuck hitting too many second serves. I was bad serving at certain times of the match. Everything else went well."

The only service break of the fist set came in the ninth game, when Williams double-faulted twice the second on game point. Davenport then held serve to win the set.

Davenport carried her momentum into the second set, breaking Williams thanks in part to a double fault on the game's final point to take a 1-0 lead. That would be the first of five breaks in the set.

After Davenport held in her first seven service games of the match, Williams broke in the sixth, eighth and 10th games of the second set to offset a break by Davenport in the seventh game.