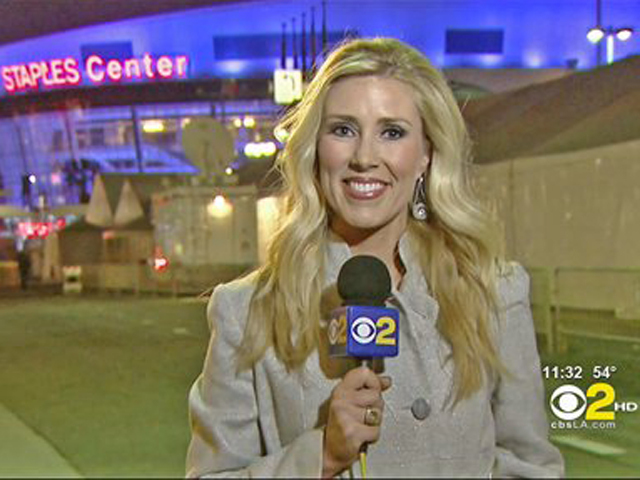 As the show ended and the 11 p.m. newscast began, Branson went live with an incomprehensible report.

Branson was attempting to say the words "Grammy," and "Lady Antebellum," but instead, viewers heard a string of nonsensical syllables and sounds.

In an "Early Show" interview Friday, Branson said watching herself in the clip is "troubling."

Kerry Maller, a KCBS producer, told "The Early Show," "You could see in the tape she's trying to talk."

"Early Show" co-anchor Erica Hill asked Branson "What were some of the other things going through your mind? Because you clearly you knew what you wanted to say. You had something planned."

"I knew something wasn't right as soon as I opened my mouth," Branson said. "I hadn't been feeling well a little bit before the live shot. I had a headache, my vision was very blurry. I knew something wasn't right, but I just thought I was tired. So when I opened my mouth, I thought, 'This is more than just being tired. Something is terribly wrong.' I wanted to say, 'Lady Antebellum swept the Grammys.' And I could think of the words, but I could not get them coming out properly."

Maller, who was on-location with the veteran reporter, said, "After the live shot, she dropped the microphone and got very wobbly."

After the live broadcast, Branson told Hill, she was swarmed by photographers and her field producer.

She recalled, "They sat me down immediately. I dropped the microphone. Right after that, my cheek went numb, my hand went numb, my right hand went numb and I started to cry. I was scared. I didn't know what had gone on and I was embarrassed and fearful."

Paramedics arrived and checked Branson's vital signs and said she was fine.

She was driven home.

"She really did want to drive. She wanted to drive a lot," Maller said.

Within hours, video of the incident hit the Internet and quickly went viral. Millions of people around the world watched and wondered what they were witnessing. Newspapers, TV reports, Twitter and Facebook users all rushed to diagnose the problem with many speculating Branson had suffered a stroke.

Neurosurgeon Neil Martin, of the UCLA Medical Center, met with Branson and concluded she was suffering from migrane aura, which can sometimes trigger stroke-like symptoms. According to Martin, many people have had similar experiences -- just not on live television.

Martin said, "It's as if there's a wave that's shutting down functions through the brain over a period of minutes."

Branson told Hill she'd never had a migraine before.

"I had headaches throughout my life, but never what I would have called a migraine," she said. "And the doctor ran lots of tests. I saw some of the best doctors in the world, top neurologists and cardiologists. They ran tests for three days. I was there for nine hours Monday, back for nine hours the next day and finally they diagnosed me with migraine aura, which is much more serious than what people think of as a migraine."

Branson said she didn't learn of her sudden Internet fame until the days after the Grammys.

"I hadn't been on the Internet," she said. "Obviously, I looked at my phone and it was inundated with phone calls. I spoke with my best friend in the morning, obviously my mother at work immediately, but I spoke with my friend, and I didn't have any idea at that point because, obviously, work and my family were so concerned about my health at that point. But my friend said something about seeing it on the news. And I said, 'the news?' And even at that point I said, 'Gosh, I hope it doesn't make it on YouTube."'

Branson said her parents had seen what happened live on the news.

"My parents watch every night," Branson said. "I talked with my mother earlier in the day. She was excited to see how my hair looked that night at the Grammys. And I know she'd been watching and she was terrified. But interestingly enough, she -- I talked to her the next day, and she said, 'This is a condition that I think I may have had. So let's get you right to a neurologist and get you checked out.'"'

On Thursday, Branson was greeted warmly by concerned coworkers as she returned to the KCBS newsroom for the first time since the incident. Doctors hope it was an isolated case, brought on by the stress of her work, and the journalist is ready to report the news again -- instead of making it.