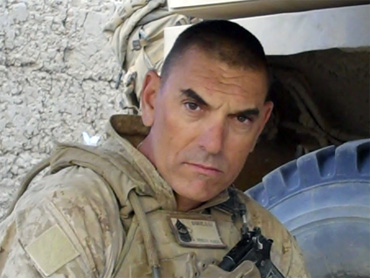 One recent evening we were sitting around the 3/1 battalion commander's armored truck when Sergeant Major Scott Samuels, (left) the top enlisted man in the battalion, dropped a gem.

He explained his simple method for drying off his boots after going on a patrol that required wading in irrigation ditches.

"I put my boots on the exhaust pipes of the MATVs," he said.  MATVs are the armored trucks that the Marines use.

We all laughed. Until we realized he wasn't joking.

The average Sergeant Major is not characterized by his delicacy. The job requires a sandpaper-grade sternness, pain-inducing vocal projection and withering facial demeanor that can vaporize the slightest precursor of trouble with a single glance. And as the senior enlisted man in a battalion, the sergeant major has to deal with plenty of misguided would-be trouble-makers.

At home it is DUI's, motorbike crashes, fights and so on - on deployment the infringements are less excessive, but still worthy of the sergeant major's gruff discipline. "My job," says Samuels, "is not to control the 1,000 Marines in the battalion. It is to control the 30 Marines who won't follow what the other 970 are doing." He says he has to "keep his foot in every door", and be able to answer all the questions the battalion commander asks him - "which is a lot".

Sergeant Major Samuels has seen a lot in his career, but if there is one thing that really gets under his skin, it is shaving - a good Marine is a clean-shaven Marine, even in the middle of a heated battle.

"What did you shave with this morning?" he asked one hapless - and clearly unshaven - Marine recently. The Marines were in the middle of an offensive against the Taliban stronghold of Safar Bazaar. They were sleeping in desert sand, there was no running water for miles, and uniforms - the infamous Flame Resistant Organizational Gear (or FROG suits) were stiff and odiferous with accumulated salt and sweat.

"I didn't shave this morning, Sergeant Major," responded the Marine. "So I guess that's the next thing you're going to do after we have finished this conversation," said Samuels - finishing the conversation.

To another Marine who had the temerity to actually sprout a moustache in the midst of the battle, Samuels said "I carry a clippers with me - but I clip all the hair bald - so the recommendation is to get rid of the moustache before I get to it." Both Marines had upper lips as soft as a baby's bottom the next time I saw them.

Another morning when he was sitting in the shade of his truck, a Marine walked by, poked his head in, saw who was there and quickly said "Hurrah, Sergeant Major," before hurrying on. "They all do that, " says Samuels. "They see the Sergeant Major, say 'I'm not going there, that's too scary with the Sergeant Major, and keep going..."

Samuels grew up in Brooklyn, went to school in New Jersey, went to college in Tennessee, then joined the Marines 25 years ago. He says the Marine Corps has changed a lot since then - more conventional warfare missions, less short-term marine-based expeditionary ventures. And because most service members retire at the latest at 20 years, when the full pension kicks in, there are very few Marines left in the Corps who were there when he joined.

The position of Sergeant Major, which dates back to 1776 in the U.S. military, and to 1801 in the Marine Corps, is a lonely one. Staff Sergeants, Gunnery Sergeants and First Sergeants all have schools to go to in order to learn their new roles, but there is no school for the top enlisted position of Sergeant Major. It is self-taught. "You learn by experience, I suppose - and you learn a lot from those you dislike - by doing the opposite," he says.

But even with the forbidding exterior, there are a few cracks. On one inspection tour Samuels arrived at an outpost in Kilo Company where the 12 Marines, living in the corner of a field, had adopted a local stray dog as a pet.

"Bad for hygiene," said Samuels gruffly when he first spotted the dog, and said if there was no other way, the Marines needed to take the dog out to the desert and shoot it.

He sat down to discuss other issues, and as he did so the dog lay down at his feet, and Samuels absent-mindedly began petting the dog. When he was ready to leave, the Marine in charge asked delicately "about shooting the dog, Sgt. Major?"

Samuels uttered a guttural grunt, which the Marines interpreted as a negative, and he then turned around to leave.

Understood by nobody, feared by many, respected by all - a Marine Corps Sergeant Major.

A Day in the Life: Wardak, Afghanistan

Preaching to the Corps

Bedtime Stories From Marines to Children Back Home