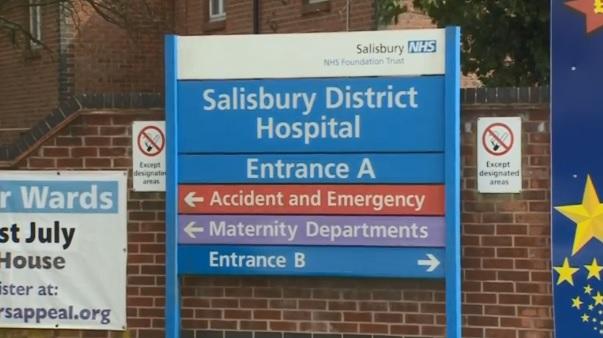 LONDON -- The former Russian spy who was left fighting for his life after exposure to a rare nerve agent is no longer in critical condition, a British health official said Friday, a month after the mysterious poisoning in a quiet English city triggered a diplomatic crisis between Moscow and the West. Sergei Skripal and his daughter, Yulia, were found unconscious on a bench March 4 in Salisbury and were hospitalized for weeks in critical condition.

British authorities blame Russia for what they say was poisoning with a military-grade Soviet-developed nerve agent called Novichok. Russia denies the accusation.

Dr. Christine Blanshard, the medical director at Salisbury District Hospital, said in a statement that 66-year-old "is responding well to treatment, improving rapidly and is no longer in a critical condition."

Russian state television on Thursday played a recording of what they said was a phone call from Yulia to her cousin, Viktoria Skripal, in Russia. In it, Yulia said she would be discharged soon.

Blanshard said Friday that Yulia Skripal could "look forward to the day when she is well enough to leave the hospital," but called any speculation about her release date "just that -- speculation."

Scientists said the Skripals' recovery was not unprecedented. Nerve agents work by blocking an enzyme in the body that lets nerves communicate with each other and with the body's organs.

Alastair Hay, professor emeritus of Environmental Toxicology at the University of Leeds, said recovery can happen over time because "eventually the body will restore the enzyme to full capacity, and nerve function will be restored."

The Skripals' long-term prognosis is uncertain, however. Michelle Carlin, senior lecturer in forensic and analytical chemistry at Northumbria University, said there is limited knowledge about the long-term effects of Novichok poisoning, but "neurological damage has been reported in other historic cases."

The poisoning has chilled relations between Russia and the West, producing a wave of diplomatic expulsions unseen even at the height of the Cold War.

Britain, along with the U.S. and at least two dozen other U.K. allies, have expelled more than 150 Russian diplomats. Russia has sent home the same number of those nations' envoys.

Russia has challenged Britain's allegation that Moscow was behind the attack. Scientists at the U.K.'s Porton Down defense laboratory identified the poison as Novichok but have not pinpointed where it was manufactured. The British government says the scientific findings and other intelligence points to Russia.

At a U.N. Security Council meeting called Thursday by Russia to discuss the Skripal poisonings, the Russian ambassador warned Britain that it was "playing with fire" and claimed that Russia was the victim of a hasty, sloppy and ill-intentioned defamation campaign by London and its allies.

Russian Foreign Minister Sergey Lavrov kept up the offensive Friday, once again urging Britain to show its evidence in the case.

Speaking on a trip to Belarus, he said British officials have engaged in "frantic and convulsive efforts to find arguments to support their indefensible position" instead of producing evidence.

Lavrov said Britain and its Western allies are wrong if they expect Russia to "confess to all deadly sins" it did not commit.

In the phone call recording released by Russian state Rossiya TV, Yulia Skripal said she and her father were both recovering and that her father's health was not irreparably damaged.

Viktoria Skripal, who works as a chief accountant in the city of Yaroslavl, told The Associated Press on Friday that she has no doubt it was Yulia who called and that she has not heard from her since. She said the call was recorded because she has an app on her phone to keep track of all the calls she makes for work.

"I made this recording, that was Yulia," she said.

Viktoria Skripal said she hoped to travel to Britain to visit Sergei and Yulia, but the British government said Friday it had denied her a visa because her application "did not comply with the immigration rules."

Britain also announced that pets in Skripal's home -- two guinea pigs and a cat -- were also poisoned. The two rodents were found dead after the home was sealed off by investigators. The Department for Environment, Food and Rural Affairs said the cat was put down after it was found "in a distressed state."

The Russian Embassy in London claimed the treatment of the pets might amount to animal cruelty and said "it is difficult to avoid the impression that the animals have been disposed of as an inconvenient piece of evidence."