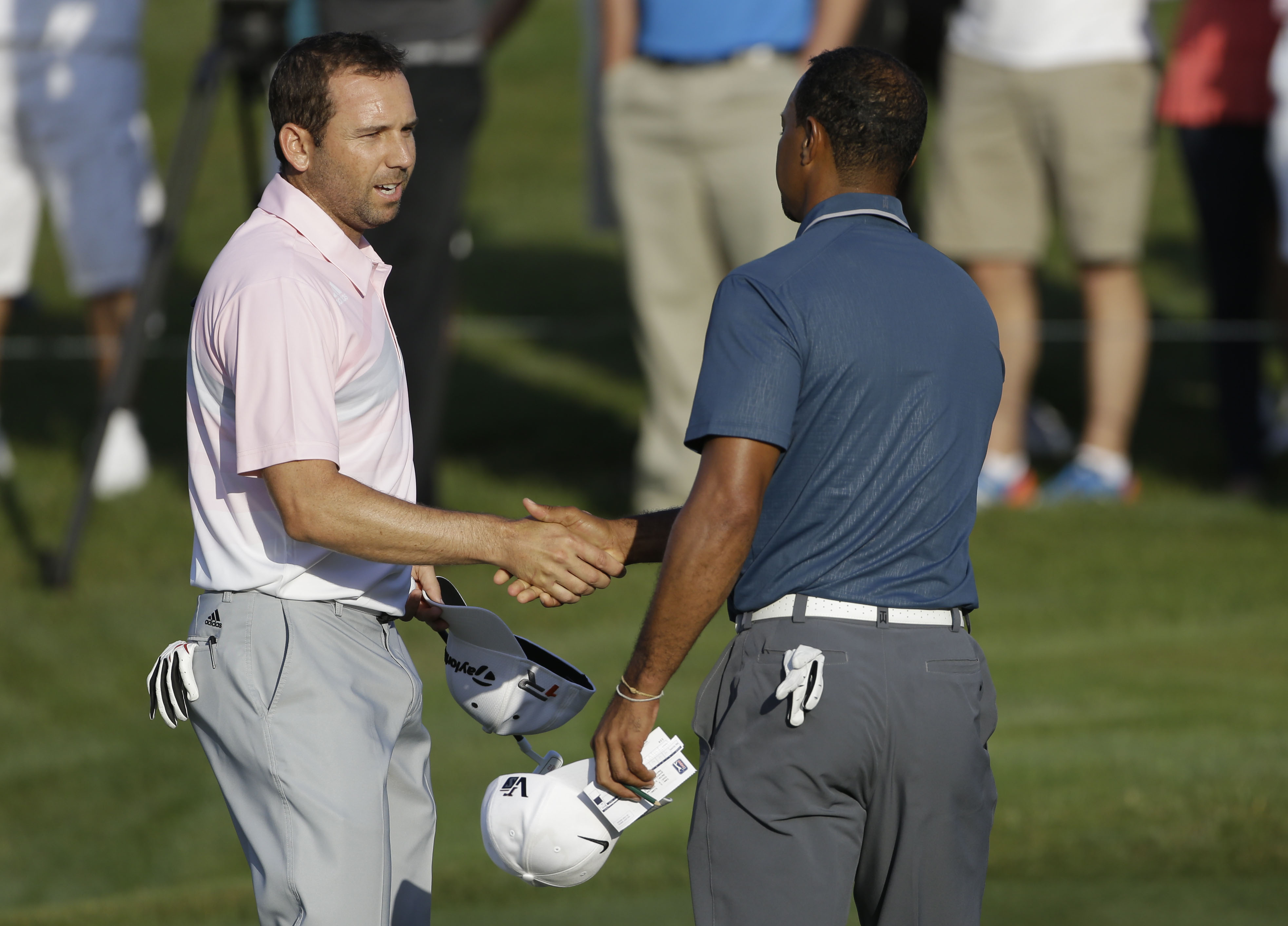 VIRGINIA WATER, England Sergio Garcia apologized to Tiger Woods for saying he would have "fried chicken" at dinner with his rival, a comment that Woods described as hurtful and inappropriate.

"I want to send an unreserved apology. I did not want to offend anyone," Garcia said Wednesday. "My answer was totally stupid and out of place."

Garcia was at a European Tour awards dinner Tuesday night when he was jokingly asked if he would have Woods over for dinner during the U.S. Open. The two players had been verbally sparring since The Players Championship nearly two weeks ago.

"We'll have him round every night," Garcia replied. "We will serve fried chicken."

The remark took the golfers' differences into ugly territory, reminiscent of when Fuzzy Zoeller made a similar comment about Woods after he won the 1997 Masters, becoming the first player of black heritage to win a major.

"The comment that was made wasn't silly. It was wrong, hurtful and clearly inappropriate," Woods said in a series of tweets. "I'm confident that there is real regret the remark was made. The Players ended nearly two weeks ago and it's long past time to move and talk about golf."

For once, both players agreed.

Garcia held an impromptu news conference at the BMW PGA Championship to elaborate on a statement he sent out Tuesday night through the European Tour.

"I want to also apologize to my Ryder Cup teammates who were there last night for taking the shine away from a wonderful event, and finally and foremost, I want to apologize to Tiger and to anyone I could have offended. I felt very sick about it and feel really bad, and just hope to settle things down and move on."

Garcia said he called Mark Steinberg, Woods' agent at Excel Sports, because he doesn't have a phone number for the world's No. 1 player.

The Spaniard said his comment about fried chicken was not intended as a racist remark and that he was caught off guard by the question from Golf Channel's Steve Sands.

"It was a funny question and I wanted it to be a funny answer in reply," he said. "I started to get a sick feeling straight after the dinner and I felt so bad I thought my heart was going to come out of my body. I felt bad about it all day."

Woods was on his way to a record win in the 1997 Masters when Zoeller was talking about his performance and ended by saying, "So you know what you guys do when he gets in here? Pat him on the back, say congratulations, enjoy it and tell him not to serve fried chicken next year. Or collard greens, or whatever the hell they serve."

The remark followed Zoeller for the rest of his career, and it cost him major endorsements.

Garcia's main sponsor is TaylorMade-adidas, which issued a statement Wednesday that his comment "was offensive and in no way aligns with TaylorMade-adidas Golf's values and corporate culture.

"We have spoken with Sergio directly and he clearly has regret for his statement and we believe he is sincere," the statement said. "We discussed with Sergio that his comments are clearly out of bounds and we are continuing to review the matter."

O'Grady said in a statement that he and Finchem spoke to Garcia after his pro-am round at Wentworth.

"Sergio expressed very deep and sincere regret for his unguarded and, in his own words, `stupid' remark and we are also aware of his statement of apology," O'Grady said. "Following our meeting, we have accepted his full apology and we consider the matter closed."

PGA Tour spokesman Ty Votaw said the tour would not be commenting on the public feud between two marquee players.

Garcia said he hoped this might lead to an improved relationship with Woods.

"Like I said before, I am terribly sorry for what happened and I am sure we can talk soon and I can apologize to him face-to-face, and move forward and forget about the whole thing," he said.

It's the second time in two years that Woods has been the center of a racially sensitive remark. At an awards night for caddies in Shanghai in November 2011, his former caddie received an award for best TV interview. Steve Williams, who had been fired by Woods in the summer of 2011, was on the bag for Adam Scott when he won at Firestone. Williams said in a CBS interview that it was "the best win of my life."

When he received the mock award, Williams said of the interview, "It was my aim to shove it right up that black a------."

He apologized to Woods the next week at the Australian Open.

Woods didn't surface for weeks after the Zoeller remarks. His absence allowed the incident to mushroom into a major story. With Garcia, he responded the next day on Twitter. They most likely won't see each other until the U.S. Open at Merion in three weeks outside Philadelphia.

"They're big names that certainly are attractive to our fans, the demographic that certainly watches the game," Zach Johnson said from the Colonial. "Maybe they add a little bit of drama here and there, and there's nothing wrong with that. I prefer that the drama and entertainment comes on the golf course, in any given week with anybody.

A timeline of quotes in the verbal sparring between Sergio Garcia and Tiger Woods. It dates to May 11 at The Players Championship, when Garcia was preparing to hit his second shot on the par-5 second hole and was disrupted by cheers from the gallery surrounding Woods in the trees because he took 5-wood from the bag:

"Well, obviously Tiger was on the left and it was my shot to hit. He moved all of the crowd that he needed to move. I waited for that. I wouldn't say that he didn't see that I was ready, but you do have a feel when the other guy is going to hit, and right as I was in the top of the backswing, I think he must have pulled like a 5-wood or a 3-wood and obviously everybody started screaming. So that didn't help very much." -- Garcia during a rain delay in the third round of The Players Championship.

"Well, the marshals, they told me he already hit, so I pulled a club and was getting ready to play my shot, and then I hear his comments afterwards, and not real surprising that he's complaining about something." -- Woods after the third round was suspended by darkness.

"That's fine. At least I'm true to myself. I know what I'm doing, and he can do whatever he wants." -- Garcia after hearing what Woods said.

"I'm not going to lie, he's not my favorite guy to play with. He's not the nicest guy on tour." -- Garcia after the third round was completed.

"It sounds like I was the bad guy here. I was the victim. I don't have any regrets of anything." -- Garcia, asked if he would have handled anything differently, after Woods won The Players Championship.

"No." -- Woods at media day for the AT&T National, when asked if he had given any thought of contacting Garcia to put their dispute behind them.

"He called me a whiner. That's probably right. It's also probably the first thing he's told you guys that's true in 15 years. I know what he is like. You guys are finding out." -- Garcia at a sponsor dinner in London.

"The problem is, I'm one of the guys that has to say something. A lot of people think about it, but don't want to say anything. He can and will beat me a lot of times, but is not going to step on me. I'm not afraid of him." -- Garcia at his press conference at the BMW PGA Championship.

"We will have him round every night. We will serve fried chicken." -- Garcia at a European Tour awards dinner, asked if he planned to have dinner with Woods at the U.S. Open.

"I apologize for any offense that may have been caused by my comment on stage during The European Tour Players' Awards dinner. I answered a question that was clearly made towards me as a joke with a silly remark, but in no way was the comment meant in a racist manner." Garcia in a statement issued by the European Tour after the dinner.

"The comment that was made wasn't silly. It was wrong, hurtful and clearly inappropriate. I'm confident that there is real regret the remark was made. The Players ended nearly two weeks ago and it's long past time to move on and talk about golf." -- Woods on Twitter.

"I want to send an unreserved apology. I did not want to offend anyone. My answer was totally stupid and out of place." -- Garcia at his second press conference.

"It was a funny question and I wanted it to be a funny answer in reply. I started to get a sick feeling straight after the dinner and I felt so bad I thought my heart was going to come out of my body. I felt bad about it all day." -- Garcia at the press conference.