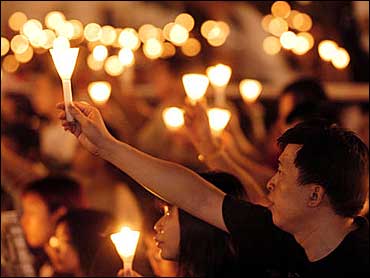 The Hong Kong security chief resigned amid a crisis over a stringent anti-subversion bill that was halted by massive protests. Secretary for Security Regina Ip said she resigned "entirely due to personal reasons," but she expressed concern the internal security bill was "not completed as scheduled" despite her efforts.

Hours later, Hong Kong's financial secretary resigned as prosecutors pondered criminal charges against him for buying a luxury car just weeks before he raised auto taxes. Financial Secretary Antony Leung had been under fire after buying a new Lexus in January before raising auto taxes in March, saving himself $24,359. He said it was an oversight and sought to make amends by donating money to charity.

Chief Executive Tung Chee-hwa said in separate statements he had accepted both resignations as he struggles to overcome the biggest crisis his government has faced in the six years since Hong Kong was returned from Britain to China.

Tung said Ip had proposed stepping down on June 25 for personal reasons and that he argued she should stay, suggesting she take a leave instead.

"But regrettably I could not change her decision," Tung said.

Critics said Ip's resignation was inevitable after her handling of the contentious bill threw Hong Kong's government into its biggest crisis since the handover from British to Chinese sovereignty on July 1, 1997.

"As a Chinese national and the secretary for security, I sincerely believe I have a responsibility to actively promote this highly important legislative task," Ip said.

Ip was one of the least popular members of Tung's inner circle, and derided by the unflattering nickname "Broomhead" by critics who took aim at her headline-grabbing hair perms.

Lawmaker Albert Chan, a persistent government critic, said that if Ip had offered to quit last month then Tung should have said so at the time.

"Why did Tung delay making an announcement and hide it from the public for three weeks?" Chan said. "This is a very serious problem. In handling Ip's resignation, Tung once again demonstrated his hesitant style and incompetence."

Ever since the handover, Hong Kong has been constitutionally required to outlaw subversion in a national security bill. But critics say the government went too far with a measure that would clamp down on local freedoms of speech, press and assembly.

Ip rejected such worries and pushed hard to have the bill passed on July 9 as scheduled, but the government had to back down following a July 1 protest by a half million people.

After the march, Tung's government was forced to water down parts of the bill, but he first tried to get it passed on schedule. That effort collapsed as legislative support eroded, and the bill was shelved. It now remains in limbo.

Critics said the measure was too harsh, outlawing subversion, treason, sedition and other crimes against the state with life in prison for some offenses.

Tung's statement on Leung, the outgoing finance secretary, did not give a reason for his departure.

Hong Kong's Independent Commission Against Corruption investigated the matter of the car purchase and officials said Tuesday that the commission handed its finding to the Justice Department, but declined to provide details of the report.

Leung has said he bought the car to prepare for the birth of his first child. Leung's wife, the Chinese Olympic gold medalist diver Fu Mingxia, delivered a girl on Feb. 26.

Hong Kong and China are linked by what has been called the "one country, two systems" arrangement, in which Beijing handles foreign and defense matters but the island province enjoys substantial political autonomy and operates a capitalist economy.

The region comprises two islands, Lantau and Hong Kong island, and a peninsula attached to China known as the New Territories. With a total land mass roughly six times the size of Washington, Hong Kong is home to 7.3 million people