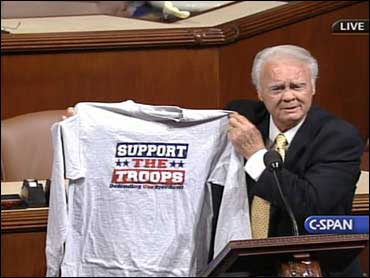 A four-game losing streak by the Detroit Red Wings must have seemed as shocking to the Anaheim Mighty Ducks as it was to the Stanley Cup champions themselves.

After all, this was the team that won the last two Stanley Cups and had behind its bench a Hall of Fame coach whose eight championships with three different teams matched Toe Blake's record total with the Montreal Canadiens.

Besides, the Red Wings hadn't lost four in a row since Scotty Bowman's first month in Detroit October 1993. In fact, the last time they lost five straight was January 1991, during a seven-game skid.

So Sunday's 3-2 victory did more that help ease Detroit's collective psyches. It also demonstrated to the Ducks that they still have some work left before they can start rating themselves among the NHL's elite teams.

"After a game like this, I feel like we're still a long way from being a Stanley Cup contender," said Paul Kariya, who tied his own club record with 12 shots on goal. "But our effort and work ethic is there. We were focused for three periods.

"With them losing four straight, we knew it would be tough."

Brendan Shanahan scored the go-ahead goal twice in the third period for the Red Wings and set up a second-period goal by Steve Yzerman. Shanahan got the game-winner from the seat of his pants, as Igor Larionov's wrist shot from the top of the left circle caromed off Shanahan's left side and past Guy Hebert with 5:49 remaining.

"You have to win however you can," Shanahan said. "When the game was tied, we responded."

Teemu Selanne set up power-play goals by Tomas Sandstrom and Marty McInnis, the latter coming with 7:18 left in regulation. But Sandstrom left the game with 9 ½ minutes remaining in the second period after he was checked into the boards by Kirk Maltby and broke his left wrist. He is expected to miss four to six weeks.

"This is a big blow, losing Tomas," Kariya said. "The way he played on the power play was great, and we need him."

Shanahan broke a 1-1 tie with his eighth goal, converting Larionov's pass from behind the net with 10:17 left in the third. McInnis responded with his first goal for Anaheim, onetiming Selanne's feed from the right boards and beating Chris Osgood through the pads from 20 feet in the slot.

Yzerman, who has scored all four of his goals on the road, pulled the Red Wings into a 1-1 tie on a power play at 3:03 of the second period while ex-teammate Jamie Pushor was in the box for tripping Vyacheslav Kozlov. The Red Wings' captain lifted a bouncing puck over Hebert's glove from the left of the crease after Shanahan set him up from the top of the right circle.

Playing before their second home sellout crowd of the season and first since the home opener, the Ducs led 1-0 after the first period despite taking 22 shots on net. That total aided by four power plays was the second highest for one period in club history and four fewer than they had on Jan. 1, 1994, at Florida.

Kariya, who leads the NHL with 72 shots on goal, took nine of those first-period shots during his 10 minutes and 19 seconds on the ice and broke his own club record for shots in one period. He had seven in the second period of a 6-4 victory over Washington on Dec. 12, 1997 in Anaheim.

"Shots on goal don't mean much," Bowman said. "We knew they were going to play that line for 25 minutes. It's tough to press teams with that extra two feet behind the net."

Osgood, 6-0-2 lifetime against Anaheim, stopped the first 15 shots he faced before Sandstrom extended his goal-scoring streak to three games with his fifth of the season.

Yzerman was serving an interference penalty when Osgood stopped Selanne's wraparound attempt. But Sandstrom who has scored Anaheim's first goal in each of the last three games while on the power play converted the rebound at the 11:55 mark. That gave him 32 points in 32 career games against the team he won his only Stanley Cup ring with in 1997.

The Red Wings took the first 10 shots of the second period and did not allow the Ducks to take their next shot on net until the 8:15 mark of the period. Just 25 seconds earlier, rookie left wing Johan Davidsson lost control of the puck on a breakaway just as Osgood made a move to poke check it away.

Anaheim had two more chances to regain the lead in the second period. But Jeff Nielsen knocked one off the left post from 25 feet out with 6:41 left in the period, and Osgood stopped Davidsson from close range less than 1 ½ minutes later after the rookie burst through a wide seam in the Detroit defense.