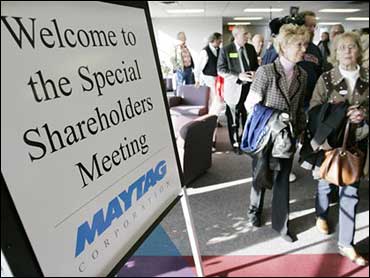 Shareholders of Maytag Corp. on Thursday approved the sale of the company to rival appliance-maker Whirlpool Corp. for about $1.79 billion in cash and stock.

Preliminary totals show that of 80.3 million outstanding shares, 54.98 million shares, or 68.5 percent, approved the merger. The company said 97.8 of voted shares approved the deal, according to preliminary tallies.

If the transaction is cleared by the U.S. Department of Justice early next year, it will mark the end of the iconic Iowa-based company as an independent appliance manufacturer.

Newton-based Maytag was founded in 1893 by Fred Maytag, a maker of farm tools, who introduced a wooden-tub washing machine 14 years later. His innovative designs swept the nation and the company has remained a home-appliance leader for a century.

The vote was a grim result for longtime Maytag workers and retirees.

"I feel like I attended a funeral today," said Judy Mulbrook, of Milford, Iowa, who retired from Maytag in 2003 after 32 years. "I feel like the death happened in the past year and this is putting everything to rest."

Ed Trost, 79, of Newton, said the merger is the only future for the company. He said Maytag was slow to react to the softening appliance market and increased foreign competition.

"It's heartbreaking," said Trost, who worked for Maytag for 35 years before retiring in 1988. "You go through life thinking it's going to be here forever, but that's not materializing now."

In recent years, however, Maytag's profitability has languished as competitors improved efficiency by outsourcing parts and moving production to low-cost factories. Maytag was slow to adopt cost-saving measures and fell behind as competitors wooed consumers away with new appliance designs and features.

Maytag, the nation's third-largest appliance manufacturer, became the target of a bidding battle when a New York-based investment group offered to buy the company for $1.13 billion in May.

In June, Chinese appliance-maker Haier America stepped in with a $1.28 billion offer, but it was withdrawn when Whirlpool offered $1.37 billion.

Whirlpool increased its offer three times until Maytag agreed to consider the deal.

Whirlpool, based in Benton Harbor, Mich., also will assume Maytag's debt of $977 million.

Maytag CEO Ralph Hake credited employees and loyal customers for more than a century of success for the company. He said if regulators approve the merger, Maytag as a company will cease to exist.

"We have to have an ending to have a new beginning," he said.

Shares of Whirlpool rose 19 cents to $84.07 in afternoon trading on the New York Stock Exchange, where Maytag shares rose 5 cents to $18.82.