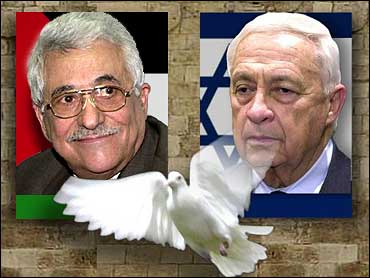 The leaders met as the Palestinian Authority outlawed groups that incite violence and agitate for change through force, moving to meet a requirement of the "road map" peace plan — and an Israeli demand — that they disarm militant groups.

The decree is the same as one issued in 1998, but was effectively rendered invalid during the 33 months of violence that followed the collapse of U.S. efforts to broker a permanent peace agreement between Israel and the Palestinians.

Palestinian Prime Minister Mahmoud Abbas left Israeli Prime Minister Ariel Sharon's Jerusalem residence after a meeting expected to focus on the release of Palestinian prisoners, which Palestinian security chief Mohammed Dahlan told The Associated Press was at the top of the agenda for the Palestinians.

The two sides made no immediate statement after the meeting, the first between Sharon and Abbas since July 1.

Israel has indicated it may partly back off its previous refusal to free any members of the two Islamic militant groups that have waged a campaign of suicide bombings against Israelis.

"I think it is possible to free people from Hamas and Islamic Jihad, with the obvious provision that they don't have blood on their hands," said Cabinet minister Gideon Ezra, using a phrase for direct involvement in deadly attacks.

On June 29 the two groups declared a three-month halt to attacks on Israelis, and were joined by Yasser Arafat's Fatah, which declared a six-month moratorium. But although violence that has killed more than 3,000 people since September 2000 is markedly down, other progress has been slowed by disagreements.

Implementing the road map — a blueprint for ending three years of violence and establishing a Palestinian state by 2005 — will be the focus of twin summits in Washington, with President Bush meeting Abbas on July 25 and Sharon four days later.

Under the road map Israel pulled out of parts of Gaza and the West Bank town of Bethlehem, but refuses to hand over more land unless the Palestinians disarm militant groups — a move which Palestinians fear could spark civil war and militants warn would nullify the truce with Israel.

At Sunday's summit, Abbas had been expected to ask Israel to release many more prisoners than the several hundred it offered to free two weeks ago. The International Committee of the Red Cross says Israel holds some 7,700 prisoners, most of them militants accused of links to terrorism.

In a telephone interview, Dahlan, who was to participate in the Sharon-Abbas summit, said prisoner release was "at the top of our agenda right now" and that Israel must free many more.

"Until now they're talking about only 400 prisoners. The Israelis right now can release 3,000 Palestinian prisoners without any serious security issues," he said.

The issue is potentially explosive. Some 1,500 people demonstrated in Gaza City on Sunday, calling for the release of all Palestinians held by Israel.

Islamic Jihad spokesman Mohammed al-Hindi warned there would be "no peace and security" unless all the prisoners were freed. "The world should know that the issue of the prisoners is a key issue for all the Palestinians, and all the prisoners should be free without any condition," he said.

Abbas had also been expected to press Sharon to pull troops out of other West Bank towns and to dismantle the scores of illegal Jewish settlement outposts — both steps also stipulated in the road map.

Sharon had been expected to reiterate Israel's demand for a crackdown on the militants as a precondition for any further progress.

Israel has been pushing Palestinian authorities to begin disarming militant groups responsible for bombings and shootings that have killed hundreds of Israelis, and has long demanded an end to what it terms incitement against it in the Palestinian media and elsewhere.

The decree issued by the Palestinians on Sunday bans "incitement that encourages the use of violence that harms the relations with foreign countries" and said that violators would be judged according to Palestinian law.

In language that seems directed at militant groups, it also bans "illegal organizations that encourage violence and arouse the public to bring about change through force" and "incitement that encourages the violation of the agreements signed by the PLO and foreign countries."

The Palestinian news agency Wafa, which carried a text of the decree, said it was issued by Arafat to "reaffirm" the 1998 ban.

On Saturday, Dahlan's office issued a statement saying the government had already started "a large-scale campaign" to bring law and order to the Gaza Strip, giving no specifics.

Israel and the United States — which accuse Arafat of fomenting terrorism and have been boycotting him — accept Abbas. But his credibility with Palestinians rests on his ability to win concessions from Sharon, especially on the prisoners.

Israel has argued that it cannot release large numbers of militants until the dismantling of armed groups that would otherwise benefit from the fresh manpower.

Abbas and Sharon have met only once since the truce was declared. Abbas called off a meeting set for July 9 amid a conflict with Arafat over who should lead negotiations with Israel. The dispute ended in compromise, with Arafat appearing to retain a considerable degree of indirect control.