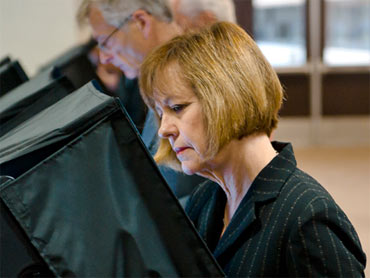 Nevada Republican Sharron Angle and Connecticut Republican Linda McMahon both spent about $97 for each vote they won in their Senate races this year, according to the Washington Post - and both women ended up losing.

This figure includes both spending by Angle and McMahon's campaigns and by the interest groups who worked on their behalf. McMahon spent about $47 million of her own money on the campaign.

Angle lost the Nevada Senate race to Senate Majority Leader Harry Reid, who also spent handsomely for votes: He and the interest groups supporting him spent $69 per vote received.

The finding supports the conventional wisdom that money does not necessarily buy electoral success. For more proof, consider Republican Meg Whitman, who spent $140 million of her own money in her losing California gubernatorial campaign. (Because Whitman was running in a large state, her spending per vote did not approach Angle and McMahon.)

That's not to say, however, that all the big spenders lost: Wisconsin Republican Ron Johnson spent $8.2 million of his own money in his winning Senate bid, and Republican Rick Scott spent more than $73 million out of his own pocket in winning the Florida governor's mansion.