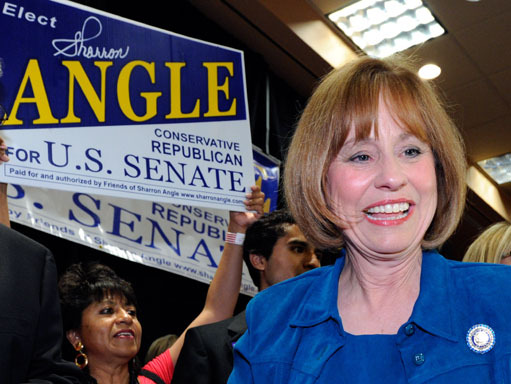 Sharron Angle, who has largely faded from the spotlight following her loss to incumbent Democrat Harry Reid in the Nevada Senate race, made headlines again this week after reports surfaced that, in the final days of her failed candidacy, Angle cited former Chilean dictator Augusto Pinochet as an example of how "sometimes dictators have good ideas."

The Nevada Sun's Jon Ralston reports that Angle made the comments "late in the campaign, during a private meet and greet" during which no members of the press were present.

Ralston continues that Angle invoked Pinochet's name when discussing Social Security privatization: "She had previously used Chile's Augusto Pinochet's experiment as an example, but had not used it since her staff shut her down," Ralston writes. "That day, with no media there, saying her staff had warned her not to use it, she raised the Chile example again and added, 'Sometimes dictators have good ideas.' Her staff fretted the line would get out. It did not. Until now."

The Tea Party favorite came under considerable fire during the campaign for her seemingly contradictory views on what should be done with Social Security - which ranged from phasing it out completely, to "personalizing" it, to serving as its "salvation."

Pinochet assumed the Chilean presidency by way of a military coup in 1973, and maintained control over the country until 1990, when he transferred power to a democratically elected president. In the wake of his rule, the former general was accused of a slew of human rights abuses - including the "disappearance" of more than 3,000 political dissidents - but never faced trial due to poor mental health. He died in 2006.