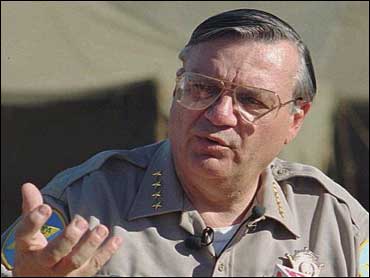 This column was written by Marc Cooper.

Just what we needed. The flamboyant Joe Arpaio, Sheriff of Maricopa County (the Phoenix area), will now have his deputies start arresting illegal immigrants.

More precisely, Sheriff Joe is deploying his volunteer — and fully armed — posse to do the job.

The detentions will be made under a new and controversial law that the Sheriff says renders the undocumented guilty of smuggling themselves illegally into the county.

Arpaio has been making headlines for the last decade: first by locking up his prisoners in a primitive tent city; then by issuing them pink underwear, striped uniforms and green-colored bologna sandwiches.

That same night I went out on patrol with some of his then newly-formed volunteer posse members. They drove fully-equipped police cruisers, purchased with their own funds. They wore uniforms identical to sworn deputies and carried new Glock 9mm pistols. The unit I went out with — led by the-then GOP County Chairman — ran down and cornered a couple of vice suspects in the parking lot of a seedy motel. With drawn guns pointed at them by the volunteer posse, the "suspects" identified themselves as undercover agents working with the Phoenix Police Department.

Now the posse is going to be out hunting illegal aliens. Heaven help us.
Reprinted with permission from The Nation