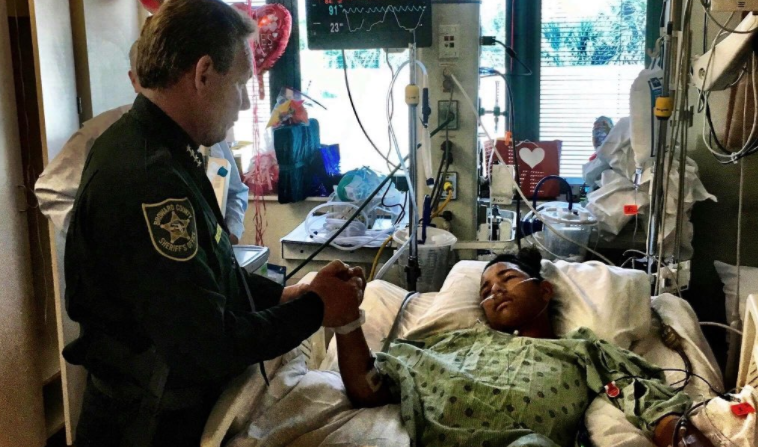 BROWARD COUNTY, Fla. -- The Broward County Sheriff on Sunday visited a teen who was shot five times during the school shooting last week at Marjory Stoneman Douglas high school in Parkland, Fla. According to a GoFundMe page, 15-year-old Anthony Borges was attempting to close and lock the door to a classroom to shield fellow classmates from the gunman when he was shot.

Nikolas Cruz, 19, a former student, is charged in the Wednesday shooting that left 17 dead and 15 injured. Police say Cruz admitted he stormed the school armed with an AR-15 rifle before ditching the weapon and blending in with fleeing students to evade authorities.

Cruz was arrested about an hour later in a neighboring residential neighborhood and is being held without bail.

On Sunday, the sheriff's office tweeted a picture of Sheriff Scott Israel visiting Anthony Borges in the hospital. According to the GoFundMe page, Borges was shot in both legs, his left upper thigh bone was shattered and a bullet went through his back.

Borges is being hailed as a hero.

"Fortunately, he is recovering -- but has a long road ahead with more surgeries needed," the tweet read. "Please join us in praying for the swift recovery of Anthony and all the other victims of this horrific criminal act."