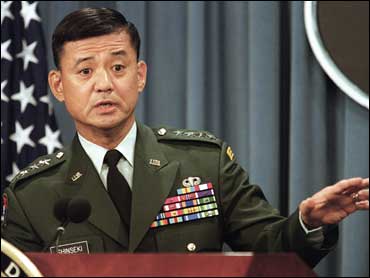 President-elect Barack Obama has chosen retired Gen. Eric K. Shinseki to be the next Veterans Affairs secretary, turning to a former Army chief of staff once vilified by the Bush administration for questioning its Iraq war strategy.

Mr. Obama will announce the selection of Shinseki, the first Army four-star general of Japanese-American ancestry, at a news conference Sunday in Chicago. He will be the first Asian-American to hold the post of Veterans Affairs secretary, adding to the growing diversity of Mr. Obama's cabinet.

"I think that General Shinseki is exactly the right person who is going to be able to make sure that we honor our troops when they come home," Mr. Obama said in an interview with NBC's "Meet the Press" to be broadcast Sunday.

NBC released a transcript of the interview after The Associated Press reported that Shinseki was Mr. Obama's pick.

Shinseki's tenure as Army chief of staff from 1999 to 2003 was marked by constant tensions with Defense Secretary Donald Rumsfeld, which boiled over in 2003 when Shinseki testified to Congress that it might take several hundred thousand U.S. troops to control Iraq after the invasion.

Rumsfeld and his deputy, Paul Wolfowitz, belittled the estimate as "wildly off the mark" and the army general was ousted within months. But Shinseki's words proved prophetic after President George W. Bush in early 2007 announced a "surge" of additional troops to Iraq after miscalculating the numbers needed to stem sectarian violence.

"He's one of the smartest guys that the military has produced. He's kind of one of those underrated-type military officers," CBS News Military consultant Mike Lyons told CBS Radio's Sam Litzinger.

Veterans activists who talked to CBS News said that Shinseki is a poignant choice given his critical stance on the war. He'll now be in charge of caring for more than 30,000 combat veterans injured in Iraq and Afghanistan. One former VA official said that Shinseki had better have - or very quickly develop - some healthcare expertise in light of that burden.

Mr. Obama said he chose Shinseki for the VA post because he "was right" in predicting that the U.S. will need more troops in Iraq than Rumsfeld believed at the time.

"When I reflect on the sacrifices that have been made by our veterans and I think about how so many veterans around the country are struggling even more than those who have not served - higher unemployment rates, higher homeless rates, higher substance abuse rates, medical care that is inadequate - it breaks my heart," Mr. Obama told NBC.

Shinseki, 66, is slated to take the helm of the government's second largest agency, which was roundly criticized during the Bush administration for underestimating the amount of funding needed to treat thousands of injured veterans returning from Iraq and Afghanistan.

Sen. Daniel Akaka, D-Hawaii, and chairman of the Senate Veterans Affairs Committee, praised Shinseki as a "great choice" who will make an excellent VA secretary.

"I have great respect for General Shinseki's judgment and abilities," Akaka said in a statement. "I am confident that he will use his wisdom and experience to ensure that our veterans receive the respect and care they have earned in defense of our nation. President-elect Obama is selecting a team that reflects our nation's greatest strength, its diversity, and I applaud him."

"General Shinseki has a record of courage and honesty, and is a bold choice to lead the VA into the future," said Paul Rieckhoff, executive director of the Iraq and Afghanistan Veterans of America. "He is a man that has always put patriotism ahead of politics, and is held in high regard by veterans of Iraq and Afghanistan."

Mr. Obama's choice of Shinseki, who grew up in Hawaii, is the latest indication that the president-elect is making good on his pledge to have a diverse Cabinet.

In Mr. Obama's eight Cabinet announcements so far, white men are the minority with two nominations - Timothy Geithner at Treasury and Robert Gates at Defense. Three are women - Janet Napolitano at Homeland Security, Susan Rice as United Nations ambassador and Hillary Rodham Clinton at State. Eric Holder at the Justice Department is African American, while Bill Richardson at Commerce is Latino.

Shinseki is a recipient of two Purple Hearts for life-threatening injuries in Vietnam.

Upon leaving his post in June 2003, Shinseki in his farewell speech sternly warned against arrogance in leadership.

"You must love those you lead before you can be an effective leader," he said. "You can certainly command without that sense of commitment, but you cannot lead without it. And without leadership, command is a hollow experience, a vacuum often filled with mistrust and arrogance."

Shinseki also left with the warning: "Beware a 12-division strategy for a 10-division army."